As we head into 2020, here is a short-list of the things we are either currently hedging portfolios against, or will potentially need to:

You can see this radical about-face in investor attitude from fear to greed in the CNN Fear & Greed Index. 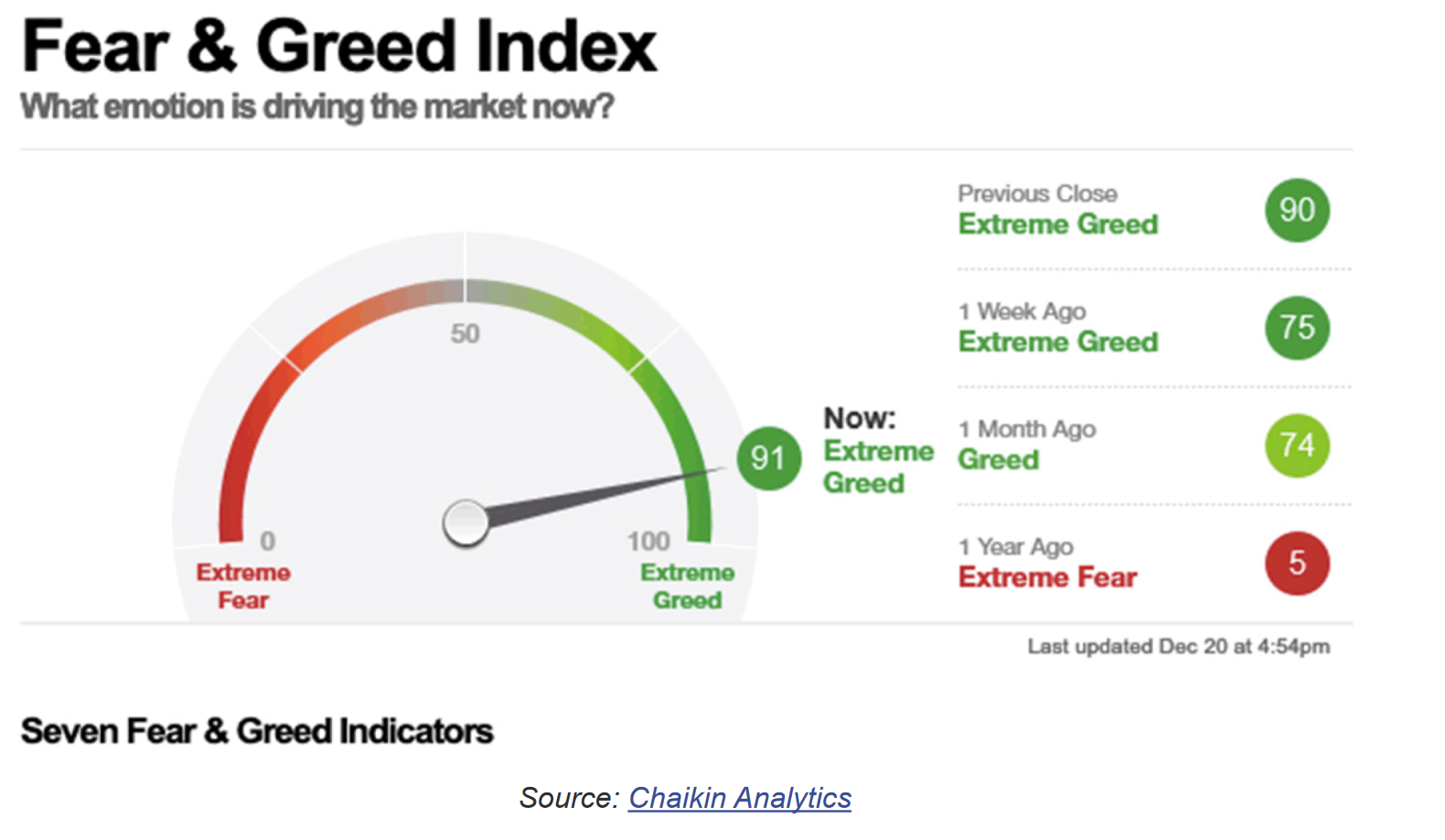 Debt and the Repo Market

Ignoring problems rarely solves them. You need to deal with them—not just the effects, but the underlying causes, or else they usually get worse.

Things that would have been easily fixed a decade ago, or even five years ago, will soon be unsolvable by conventional means.  There is almost no willingness to face our top problems, specifically our rising debt. The economic challenges we face can’t continue, which is why I expect the Great Reset, a kind of worldwide do-over. It’s not the best choice but we are slowly ruling out all others.

Beginning with Greenspan, we have now had 30+ years of ever-looser monetary policy accompanied by lower rates. This created a series of asset bubbles whose demises wreaked economic havoc. Artificially low rates created the housing bubble, exacerbated by regulatory failure and reinforced by a morally bankrupt financial system.

After that, the Fed kept rates too low for too long, reinforcing the wealth and income disparities and creating new bubbles we will have to deal with in the not-too-distant future.

Chinks in the Armor…….The Repo Market!

In September of this year, something still unexplained happened in the “repo” short-term financing market. Liquidity dried up, interest rates spiked, and the Fed stepped in to save the day.

Story over? No. The Fed has had to keep saving the day, every day, since then.  We hear different theories. The most frightening one is that the repo market itself is actually fine, but a bank is wobbly and the billions in daily liquidity are preventing its collapse. Who might it be?  It could be a mid-sized Japanese bank. I was dubious because it would be hard to keep such a thing hidden for months. But then this week, Bloomberg reported some Japanese banks, badly hurt by the BOJ’s negative rate policy,

Whatever the cause, the situation doesn’t seem to be improving. On Dec. 12 a New York Fed statement said its trading desk would increase its repo operations around year-end “to ensure that the supply of reserves remains ample and to mitigate the risk of money market pressures.”

Notice at the link how the NY Fed describes its plans. The desk will offer “at least” $150 billion here and “at least” $75 billion there. That’s not how debt normally works. Lenders give borrowers a credit limit, not a credit guarantee plus an implied promise of more. The US doesn’t (yet) have negative rates but the Fed is giving banks negative credit limits.

We have also just finished a decade of the loosest monetary policy in American history, the partial tightening cycle notwithstanding. Something is very wrong if banks still don’t have enough reserves to keep markets liquid. Part of it may be that regulations outside the Fed’s control prevent banks from using their reserves as needed. But that doesn’t explain why it suddenly became a problem in September, necessitating radical action that continues today.

Back to the Topic of Debt

Underlying all this is an elephant in the room: the rapidly expanding federal debt.

The US government ran a $343 billion deficit in the first two months of fiscal 2020 (October and November) and the 12-month budget deficit again surpassed $1 trillion. Federal spending rose 7% from a year earlier while tax receipts grew only 3%.

No problem, some say, we owe it to ourselves, and anyway people will always buy Uncle Sam’s debt. That is unfortunately not true. The foreign buyers on whom we have long depended are turning away.

I know some think China or other countries are opting out of the US Treasury market for political reasons, but it’s simply business. The math just doesn’t work. Especially given the fact that President Trump is explicitly saying he wants the dollar to weaken and interest rates go even lower. If you are in country X, why would you do that trade? You might if you’re in a country like Argentina or Venezuela where the currency is toast anyway. But Europe? Japan? China? The rest of the developed world? It’s a coin toss.

It will be really interesting to see what happens in 2020 to the repo market when the Fed tries to end its injections and how markets respond when its balance sheet stops increasing in size.

The markets will come to an interesting crossroads around the Ides of March. At that point, the Fed will have to take one of two paths:

The next recession, whenever it happens, will bring a $2 trillion+ deficit, meaning a $40+ trillion dollar national debt by the end of the decade, at least $20 trillion of which will be on the Fed’s balance sheet. (My side bet is that in 2030 we will look back and see that I was an optimist.)

Crisis isn’t simply coming. We are already in the early stages of it. I think we will look back at late 2019 as the beginning.

Investment guru Ray Dalio predicts that the Federal Reserve will resume cutting interest rates as the global economy slows down.

The billionaire investor known to share his thoughts about economic paradigm shifts on LinkedIn told CNBC that a global economic downturn is inevitable.

“Assuming that this is a normal cycle and what they thought was if you pick up growth and lower unemployment, you are going to produce inflation. We are living in a different world now for various reasons. The world has a lot of excess capacity, the world of digitalization and so on in which that is not the big thing. The big thing is the fact that we are approaching an end of the power of central banks to affect, to stimulate. So the big thing is that we have a very big asymmetric risk,” said Dalio.

“If the economy turns down and we are late in the cycle, so a downturn will come, there is a lack of ability by central banks to be able to be stimulative and that is happening at a time when there is great wealth polarity,” he said.

The danger is that the Federal Reserve is now potentially trapped with an inability to use monetary policy tools to offset the next economic decline when it occurs. Combine this with:

While the stock market may be an exclusive club for its members currently, the combined issues of debt, deflation, and demographics is a problem the Fed can’t fix.

The next crisis will repair the “wealth gap” to some degree only because 2/3rds of American’s never participated in the bull market to begin with.

Moody’s Investor Services has been warning of a coming wave of junk-bond defaults for more than a year. Over the past decade, the number of junk-rated non-financial companies has risen 58% to its highest level on record. Whenever the next era of financial stress arrives, Moody’s believes the stage is set “for a particularly large wave of defaults.”

Moody’s is a rating firm that tracks covenant (collateral for a bond) quality. For a decade, they had already chipped away at other provisions in loans known as ‘maintenance covenants’—requirements that a corporate borrower meet specific performance hurdles or else be forced to renegotiate terms or even repay debt. Today, covenant protection has never been worse. Five is bad, one is good. This is the best chart I could find. While it’s a little blurry, the data is clear. A race to the bottom indeed. 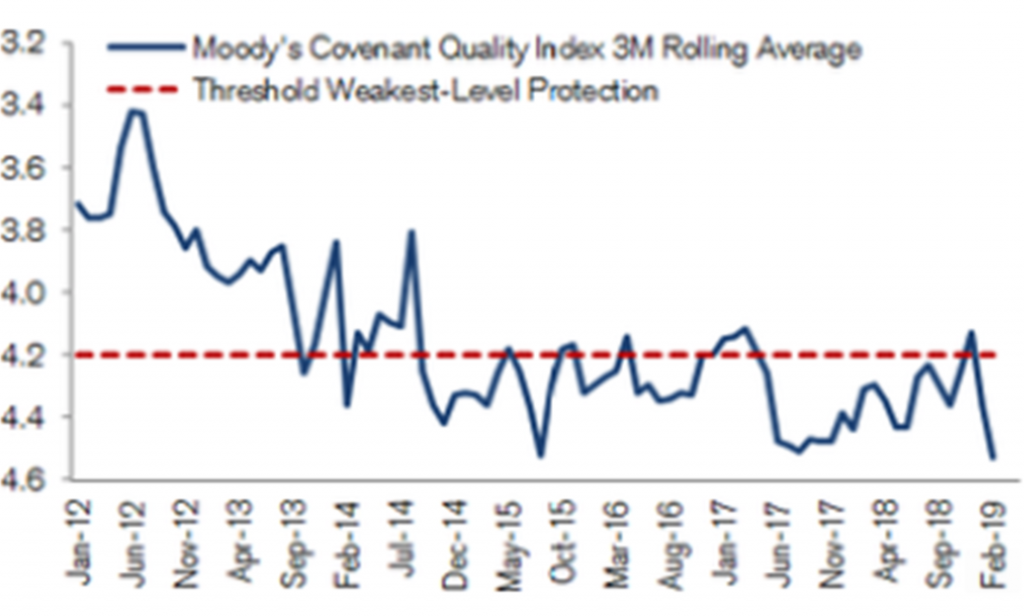 I remember when the Moody’s Covenant Quality Index was at 2. Last February, it was at 4.5 out of 5. That means we should have our lights on.

It’s not just where the money has been borrowed, it’s where it has gone. This is the weakest capital spending cycle of all time in biggest boom in corporate bond issuance of all time. So where has the money gone? Two words: financial engineering (i.e., stock buybacks).

That explains why earnings per share has been inflated and that is the biggest reason why we’ve had this ongoing powerful bull market in equities in the context of the weakest overall economic recovery of all time.

As we head into 2020, here is a short-list of the things we are either currently hedging portfolios against, or will potentially need to:

While I am not going to address all of these concerns, I do want to touch a few that we feel are significant risks heading into the first half of the decade.

Real GDP growth is slowing, with our latest estimate, based on weekly hours worked, projecting GDP growth of 1.5% for the calendar year. 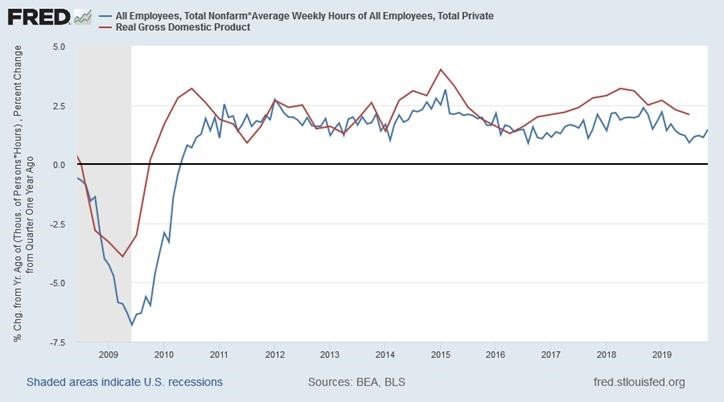 While real corporate profits are declining. 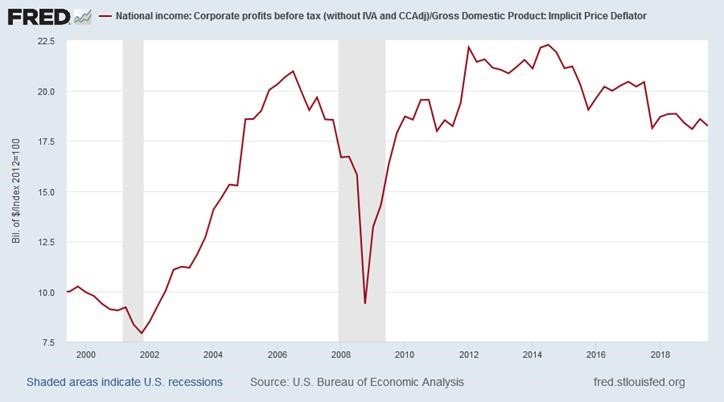 What is keeping stocks afloat?

First, a flood of new money from the Fed. They expanded their balance sheet by $375 billion since September 2019 and are expected to double that to $750 billion — bringing total Fed holdings to $4.5 trillion by mid-January — to head off an expected liquidity crisis in repo and FX swap markets. The red line below shows expansion of the Fed’s balance sheet, the blue is the S&P 500 index. 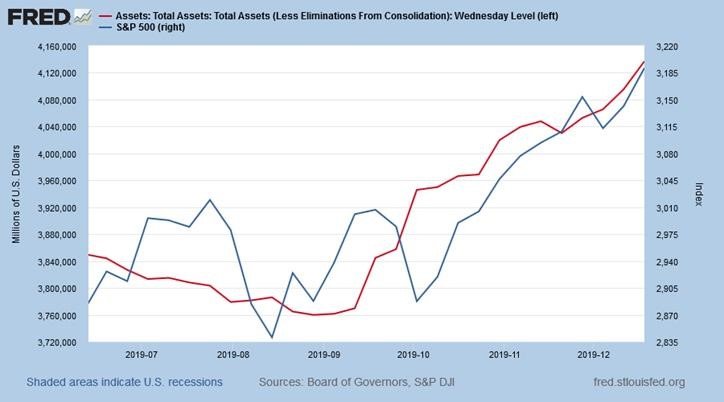 Second, ultra-low bond yields have starved investment markets of yield, boosting earnings multiples. P/E of historic earnings rose to 22.01 at the end of the September quarter and is projected to reach 22.82 in the December quarter (based on current S&P earnings estimates). 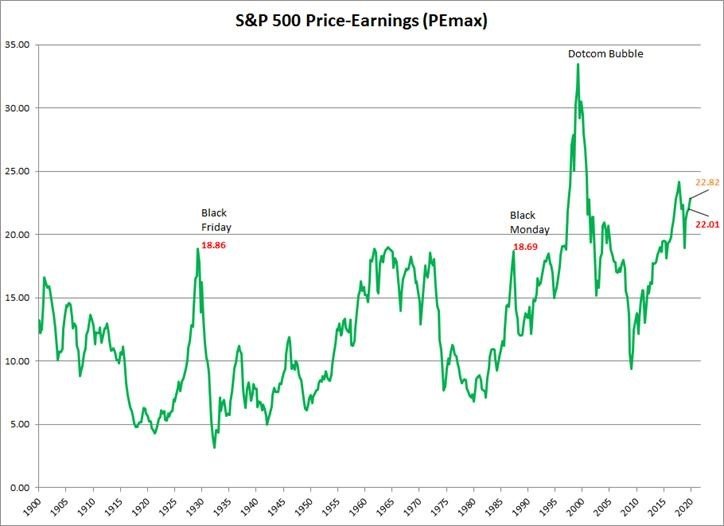 That is significantly higher than the peak earnings multiples achieved before previous crashes — 18.86 of October 1929 and 18.69 in October 1987 — and is only surpassed by the massive spike of the Dotcom bubble.

How could this end?

First, if the Fed withdraws (or makes any move to withdraw) the $750 billion temporary liquidity injection, intended to tide financial markets over the calendar year-end, I expect that the market would crash within minutes. They are unlikely to be that stupid but we should recognize that the funding is permanent, not temporary.

Second, if bond yields rise, P/E multiples are likely to fall. 10-Year breakout above 2.0% would signal an extended rise in yields. 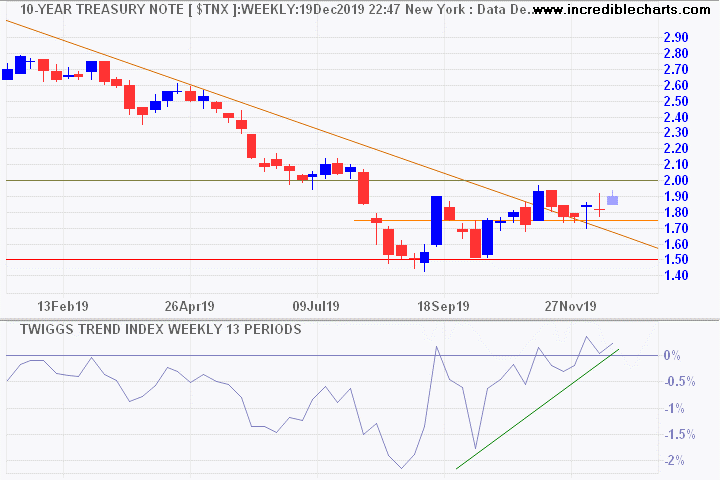 Third, and most importantly, are actual earnings. With 98.6% of S&P 500 companies having reported, earnings for the September quarter are 6.5% below the same quarter last year. Poor FedEx results and low economic growth warn of further poor earnings ahead.

North Korea recently threatened to send Washington a “Christmas gift” while demanding concession in ongoing nuclear talks. Rumors say it might be a missile capable of reaching the US mainland. That would be a strategic game-changer if true. George Friedman thinks any such test, should it happen, would be unsuccessful, and has some thoughts on Pyongyang’s real motivations. This could actually be part of China’s trade war strategy.

The unknown part is whether any such ruse originates in Beijing or Pyongyang. But in either case, it illustrates that China has more cards it can play in the trade war, and they aren’t all directly about trade. Traders who think tensions will recede in 2020 should probably think again. 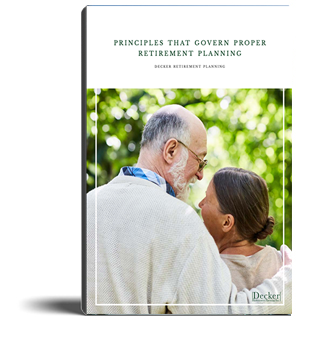 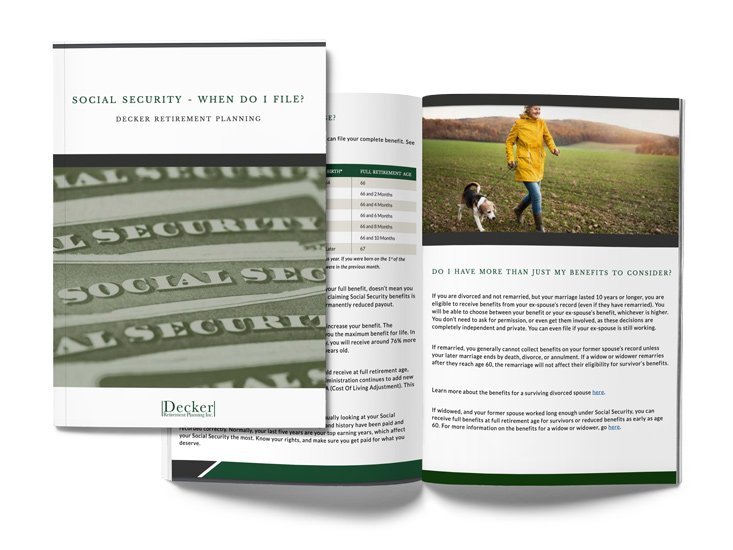