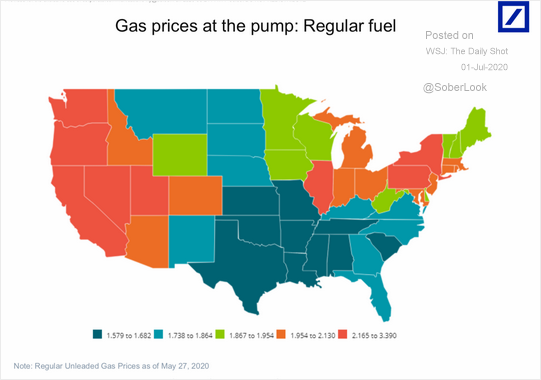 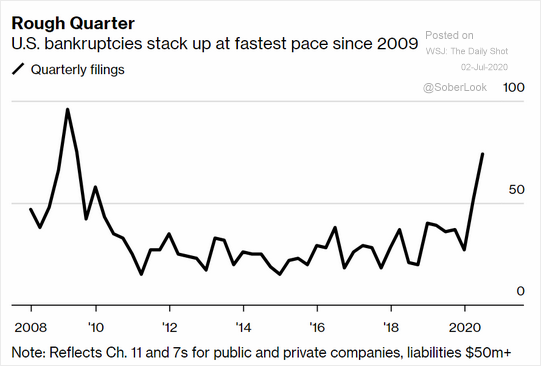 The June jobs report again came out better than expected. Any improvement is welcome, of course, but the real question is whether it will continue.

Bottom Line: The survey data behind this report was collected the week of June 7-13, before COVID-19 cases surged. With reopening plans changing fast in parts of the US, the May/June jobs improvement may not continue and could even reverse. As has been the case, the virus is in control.

A Tale of Two Markets

The Nasdaq is up almost 12% this year and the Small Caps are down about 14% and the Transports are down 16%.  It simply comes down to this; which companies can thrive during COVID lockdowns and which suffer.  Most small business and transports like airlines are getting thrashed in this COVID lockdown.  Most Tech companies are unfazed and are thriving, even with most of their employees working from home.

Over the next two weeks, we will enter the earnings season for all publicly traded corporations. Of course, we will mostly hear about those companies which comprise the S&P 500 index.

As with every quarter, we are about to play “Millennial Soccer.” This is where Wall Street analysts continually lower earnings estimates for the quarter until companies can beat them. When you see the analysis that 70% of companies beat their estimates, just remember analysts simply lowered the bar to a point where “everybody gets a trophy.”

What will be important to pay attention to is “revenue,” which happens at the top of the income statement. Companies can do a lot to fudge bottom-line earnings by using accruals, “cookie jar” reserves, share buybacks, and a variety of other accounting gimmicks. It is much more difficult to manipulate revenue.

However, the market will focus on reported earnings. As stated, the estimates have fallen sharply over recent weeks, and are far lower than where they were set previously. 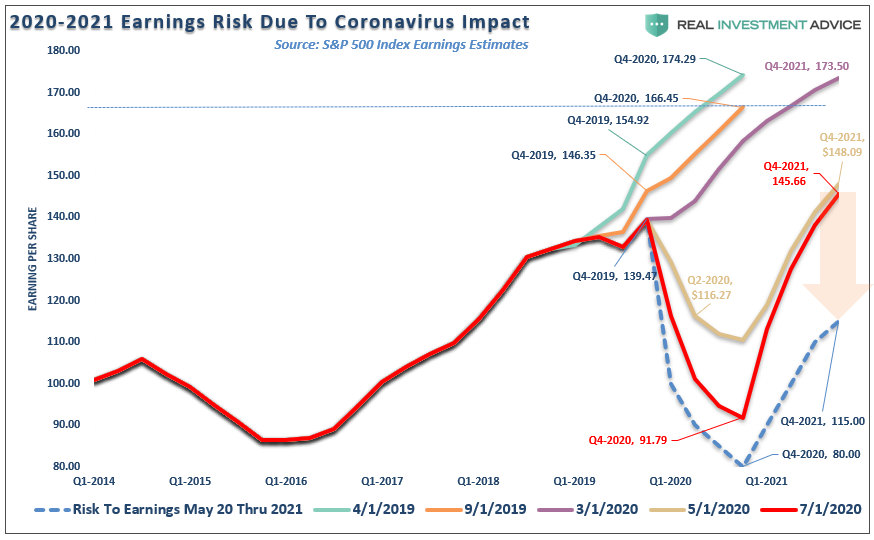 Financial institutions have been merging into a smaller number of very large banks. Almost all banks are now interrelated. So, the financial ecology is swelling into gigantic, incestuous, bureaucratic banks—when one falls, they all fall.

The increased concentration among banks seems to have the effect of making financial crisis less likely, but when they happen they are more global in scale and hit us very hard. We have moved from a diversified ecology of small banks, with varied lending policies, to a more homogeneous framework of firms that all resemble one another. True, we now have fewer failures, but when they occur… I shiver at the thought. I rephrase here: we will have fewer but more severe crises. The rarer the event, the less we know about its odds. It means that we know less and less about the possibility of a crisis. 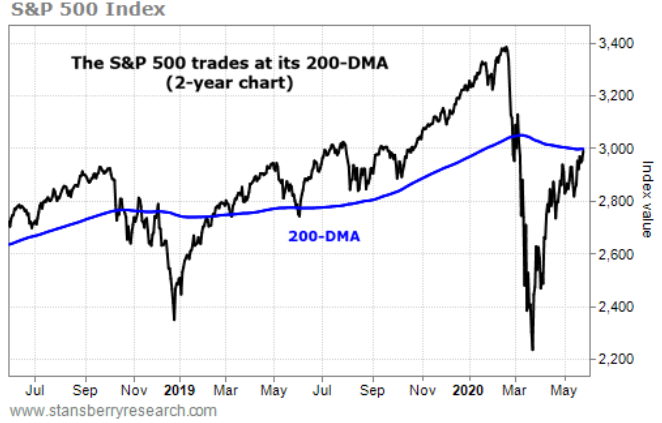 Bubbles can exist even at times when valuations and fundamentals might argue otherwise. Let’s look at an elementary example. The chart below is the long-term valuation of the S&P 500 going back to 1871. 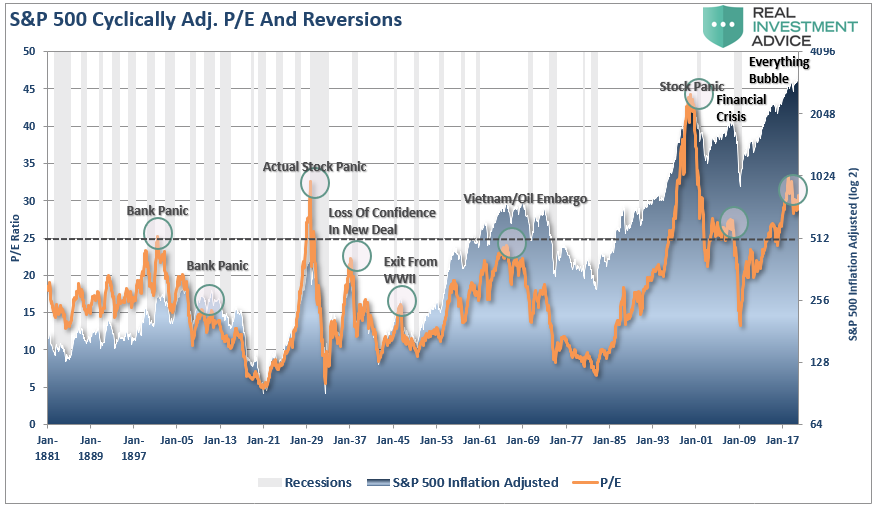 Notice that except for 1929, 2000, and 2007, every other major market crash occurred with valuations at levels LOWER than they are currently.

Secondly, market crashes have been the result of things unrelated to valuation levels. Such as liquidity issues, government actions, monetary policy mistakes, recessions, and inflationary spike, or even a “pandemic.” Those events were the catalyst, or trigger, which started the “reversion in sentiment” by investors.

Market crashes are an “emotionally” driven imbalance in supply and demand. Such has nothing to do with fundamentals. It is strictly an emotional panic, which is ultimately reflected by a sharp devaluation in market fundamentals.

That is what started in March.

The Fed’s actions have only temporarily halted its inevitable completion.

There are numerous problems which the Fed’s current policies cannot fix:

The lynchpin in the U.S., remains demographics, and interest rates. As the aging population grows, they are becoming a net drag on “savings,” the dependency on the “social welfare net” will explode as employment and economic stability plummets, and the “pension problem” has yet to be realized.

While the current surge in QE has been successful in inflating another bubble, there is a limit to the ability to continue pulling forward future consumption to stimulate economic activity. There are only so many autos, houses, etc., that consumers can purchase within a given cycle.

Unfortunately, extremely high levels of unemployment, lack of incomes, and a slow economic recovery will likely undermine those hopes.

One thing is for certain. The Federal Reserve will never be able to raise rates or reduce monetary policy ever again.

The only question is, what will the Fed do if “all the king’s men can’t put Humpty Dumpty back together again?”

Cases have gone up with more testing. 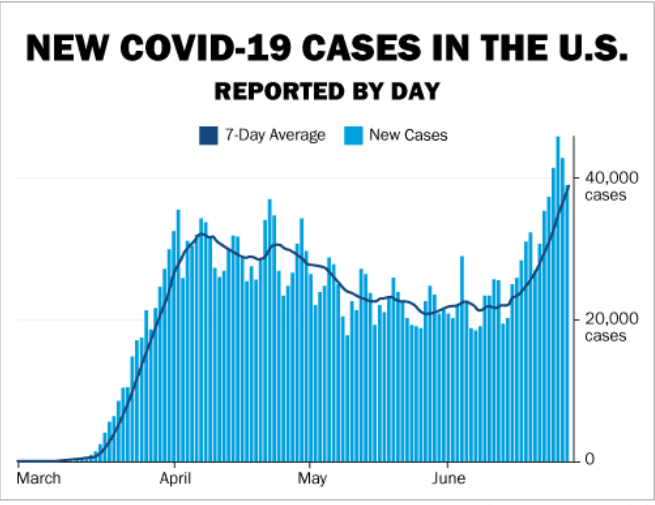 But number of deaths have gone down. 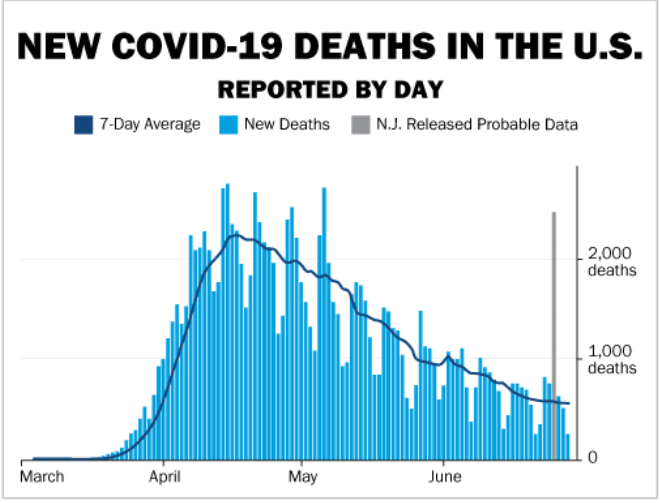 Overall, if you prefer a healthy, pandemic-free world, this is good news… The continued trend down in new deaths – despite new “hotspots,” “record infections,” and almost 600,000 new tests each day over the past week – is important.

Economists are worried about the “income cliff” at the end of the month. That’s when the $600/week of additional unemployment benefits run out. 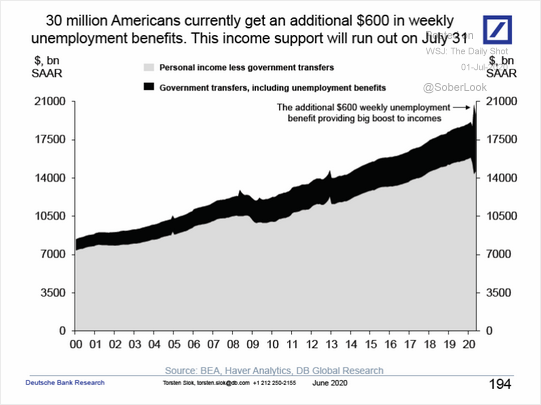 More importantly there is a problem in the data when you have more people getting unemployment benefits than there are unemployed workers.

There were 19.29 million workers receiving unemployment insurance. And yet, somehow, at the same time, the BLS also represented that the total number of unemployed workers is, drumroll, 17.75 million.

If you said this makes no sense and pointed out that the unemployment insurance number has to be smaller than the total unemployed number, you are right. And indeed, for 50 years of data, that was precisely the case. 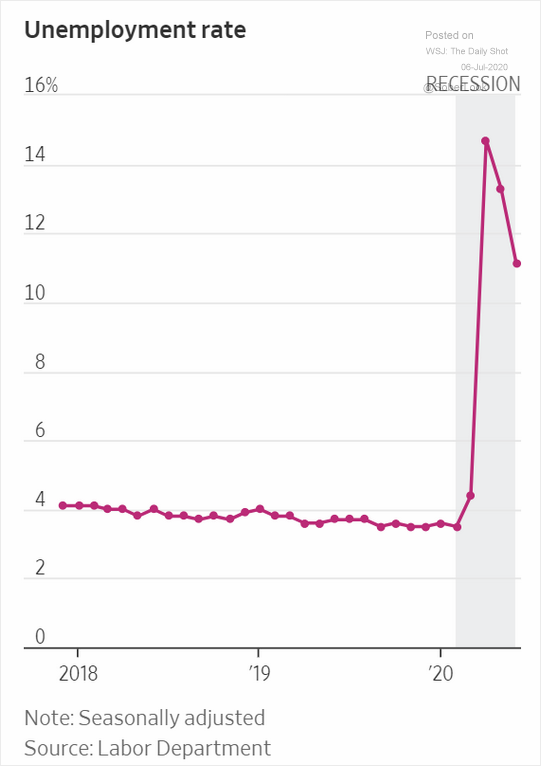 Here is the breakdown by industry: 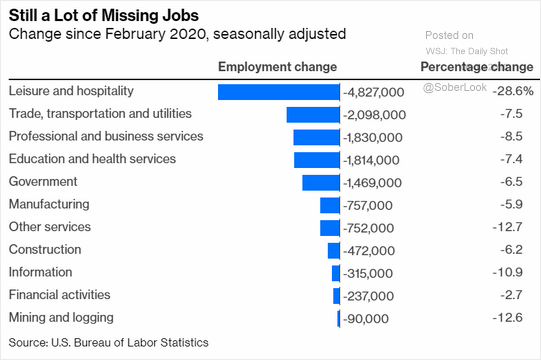 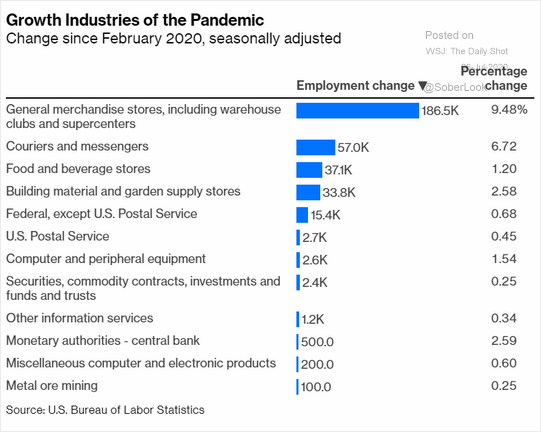 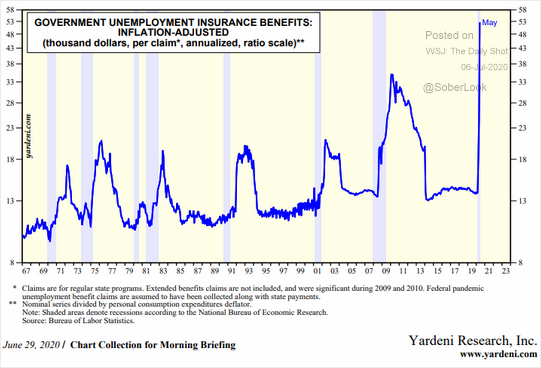 It didn’t take long. Over the last several years, we have discussed the risk of excessive monetary policy inflating a bubble in a variety of assets from debt, to real estate, to stocks. In March, it appeared as if the bubble had finally popped. However, the Fed’s quick response and massive monetary interventions ceased the asset bubble’s deflation and re-inflated it.

The idea of another bubble was put forth recently by Jeremy Grantham of GMO fame:

“At GMO, we dealt with three major events before this crisis, and rightly or wrongly, we felt ‘nearly certain’ that we would be right sooner or later. We exited Japan 100% in 1987 at 45x and watched it go to 65x (for a second, more significant than the U.S.) before a downward readjustment of 30 years and counting. In early 1998 we fought the Tech bubble from 21x (equal to the previous record high in 1929) to 35x before a 50% decline. Through 2007 we led our clients relatively painlessly through the housing bust.

In all three, we felt we were nearly sure to be right. Japan, the Tech bubbles, and 1929, which sadly I missed, were not new types of events. They were merely extreme cases akin to South Sea Bubble investor euphoria and madness. The 2008 event was also easier if you focused on the U.S. housing euphoria, a 3-sigma, 100-year event, or, simply, unique. We calculated that a return trip to the old price trend and a typical overrun in those extreme house prices would remove $10 trillion of perceived wealth from U.S. consumers and guarantee the worst recession for decades. All these events echoed historical precedents. And from these precedents, we drew confidence.

But this event is unlike all those. It is new, and there can be no near certainties, merely strong possibilities.”

Unfortunately, given the Fed stopped the “debt reversion process” with the latest rounds of monetary interventions, nearly $4.00 of debt are required to create $1 of economic growth. This all but guarantees that future economic growth will be further retarded. 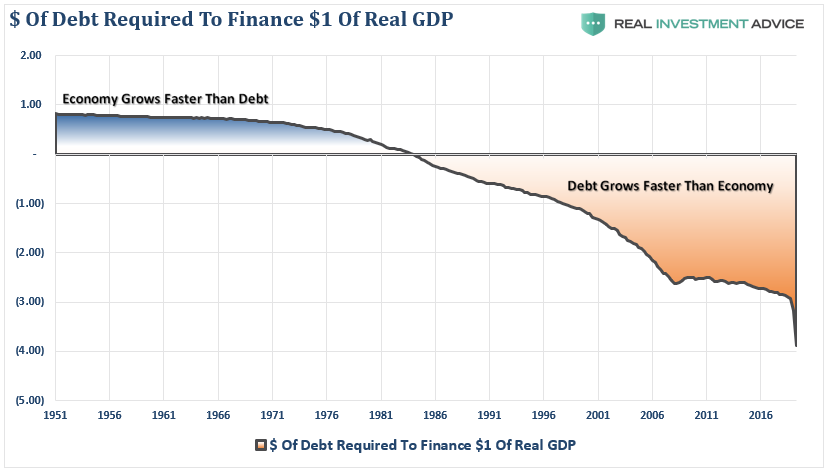 Jerome Powell clearly understands this risk. After a decade of monetary infusions and low interest rates, the Fed has created the largest asset bubble in history. However, trapped by their own policies, any reversal leads to almost immediate catastrophe as seen in 2018, and again in 2020.

It is imperative for the Fed that market participants, and consumers, “believe” in their actions. With the entirety of the financial ecosystem more heavily levered than ever, the “instability of stability” remains the most significant risk.

By not letting the system correct, letting weak fail, and allowing valuations to revert, the Fed has trapped itself into an even bigger bubble. One way to view this problem is by looking at the Nasdaq 100 versus the S&P 500 index. That ratio is now at the highest level ever. 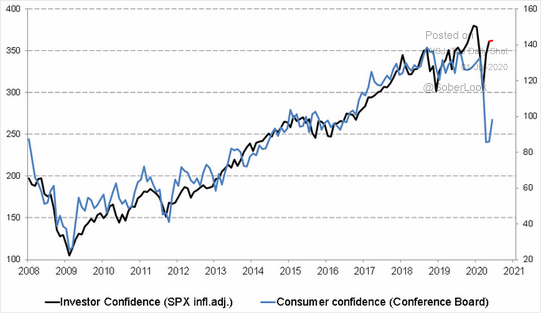 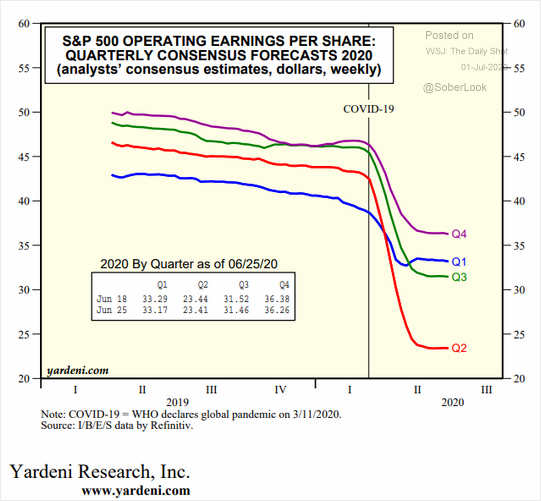 All Content is the Opinion of Brian J. Decker