The five largest lenders in the U.S. – JPMorgan Chase, Wells Fargo, Bank of America (BAC), Citigroup (C), and U.S. Bancorp (USB) – say the financial stress caused by the pandemic could cause borrowers to default on a total of $104 billion in debt.

JPMorgan Chase, for one, is predicting the bank could have to cover $32.1 billion in bad loans. That’s nearly triple the $13.2 billion that it was predicting a year ago.

In other words, that $600 extra benefit, even for one week, counts big-time in the grand scheme of things when it leads to folks defaulting on their debts.

While a lot of stocks have recovered significantly from their March lows, banks have not. That reflects the concern for prolonged economic impact from the COVID-19 pandemic… or at least that the recovery won’t be as strong as a lot of people envisioned a few months ago.

Wells Fargo stock is down more than 50% this year, JPM is down almost 30%, and Goldman Sachs is down around 5%. And financial stocks in general remain down more than 20% for the year. 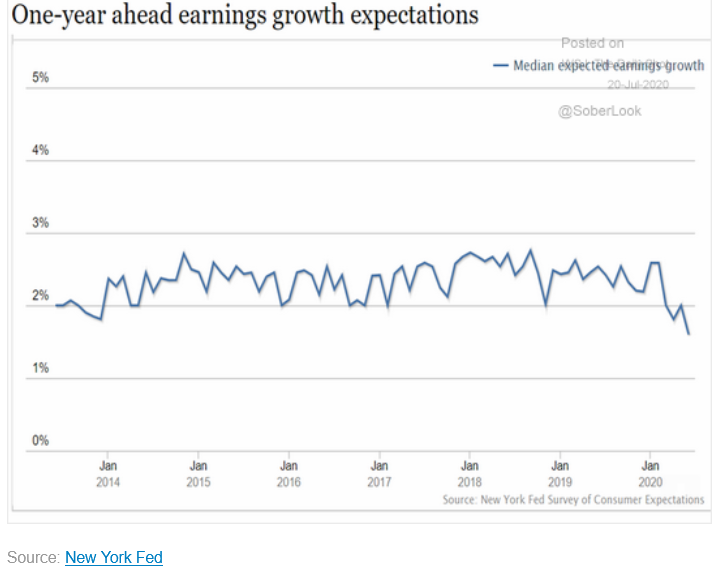 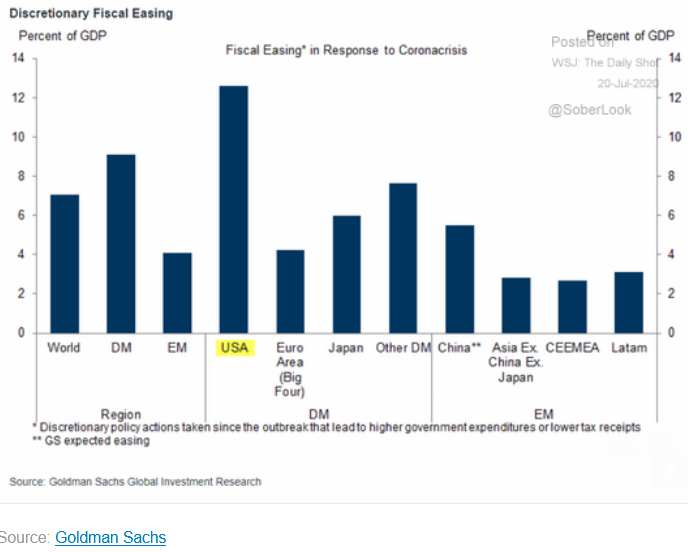 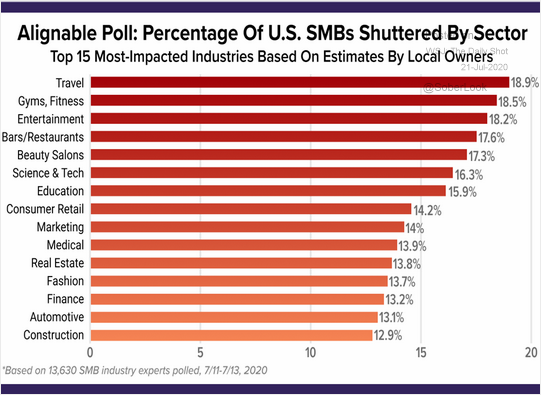 The markets are about to enter the seasonally “weak,” two months of the year.

While this list is by no means exhaustive, it does offer many of the most important assumptions currently supporting the market.

According to Gavekal, US infections should peak by mid-August. 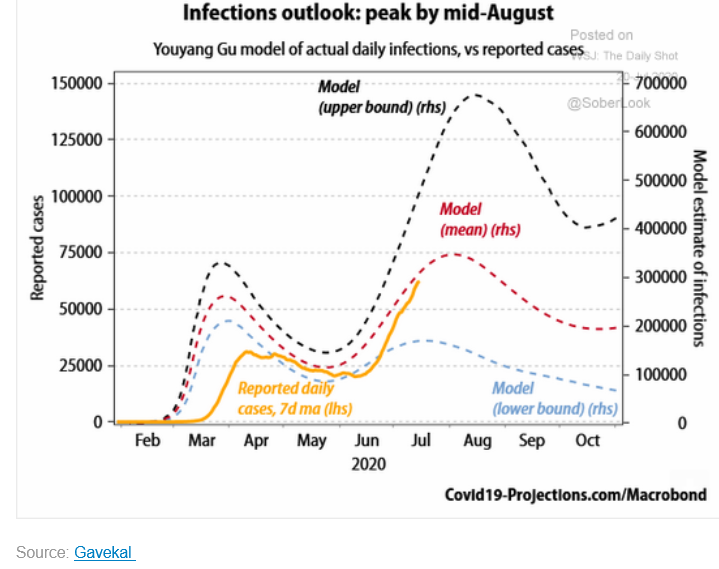 And fatalities will peak between late August and mid-September. 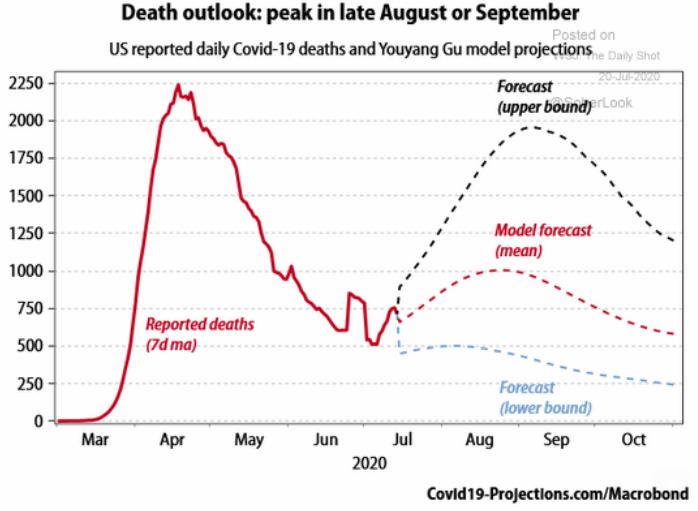 Reserves are lower due to the latest downturn in the Fed’s balance sheet as well as further increases in the US Treasury’s cash holdings with the Federal Reserve (which drains private-sector deposits). The federal government now holds over $1.8 trillion at the Fed. 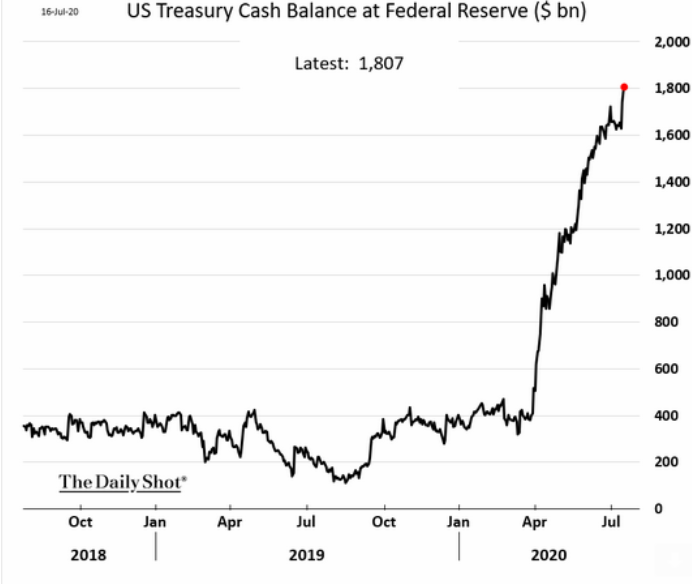 The trade-weighted US dollar index is testing decade-long uptrend support. A lower US Dollar means a higher Gold and Silver price, all other things being equal. 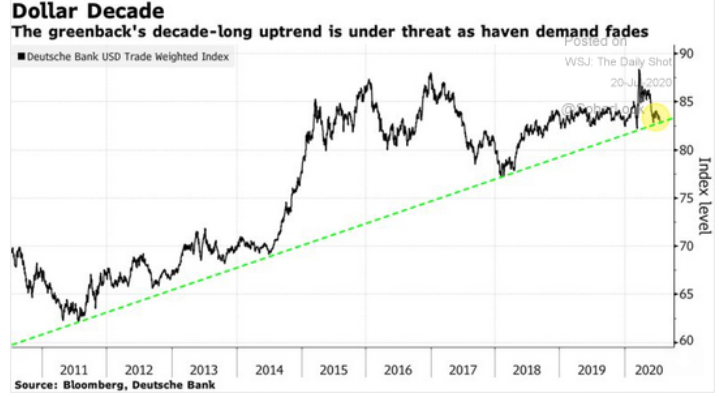 The partnership between Oxford University and AstraZeneca will see another Phase III test involving 30K participants in the U.S. beginning next week, along with a parallel test of the Moderna vaccine. It would not be a surprise if more manufacturing deals are announced by companies pushing ahead with vaccine development.

This week’s upturn in initial unemployment claims comes as virus cases climb and many states reimpose business restrictions. It’s a reminder that economic disruptions will continue until something disrupts the virus. The RSM economics team argues a vaccine is the only answer, and unfortunately may not come as soon as hoped.

Bottom Line: Equity valuations and political statements suggest a vaccine will be available in 2020 and quickly spark an economic recovery. RSM believes risks to this outlook are both significant and not fully reflected in the markets or public sentiment.

The most profitable company in each state: 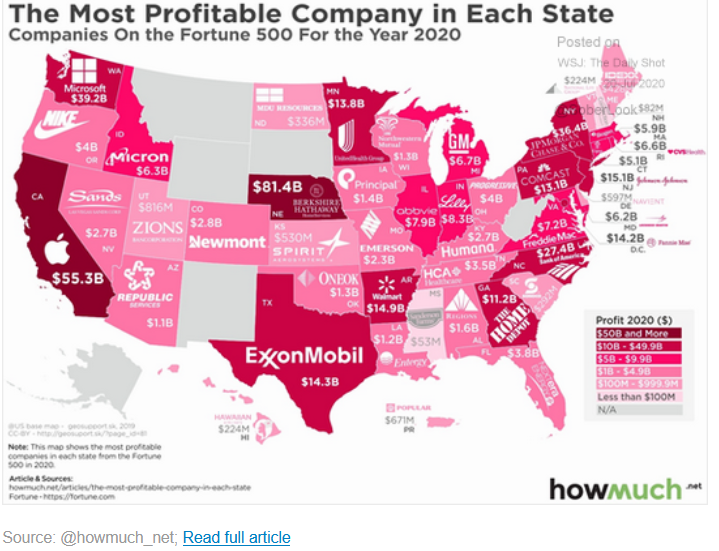 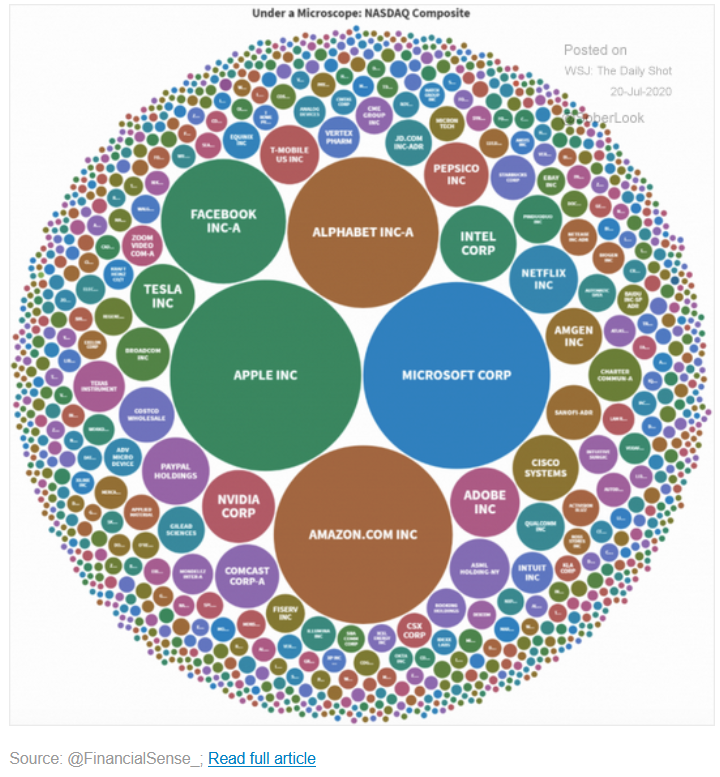 Warren Buffet is Having a Tough Year 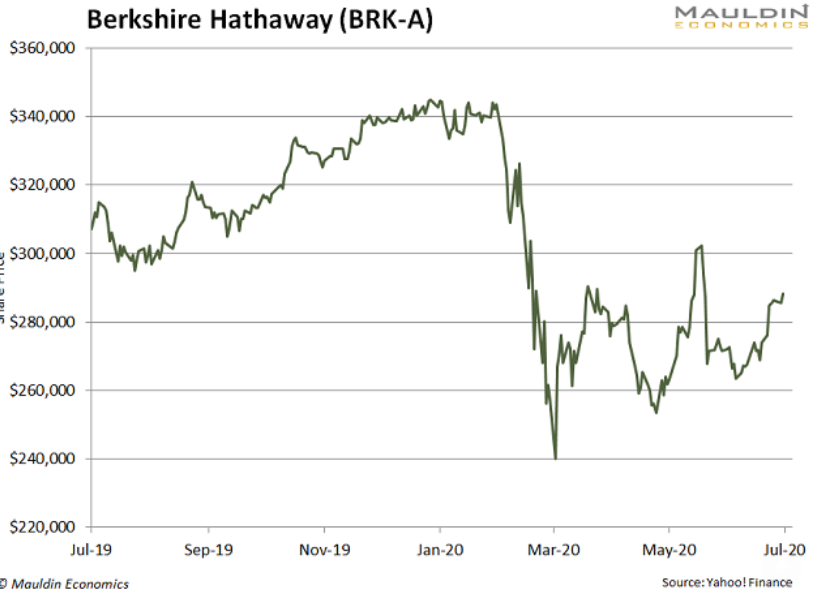 Population aged 65 and over: 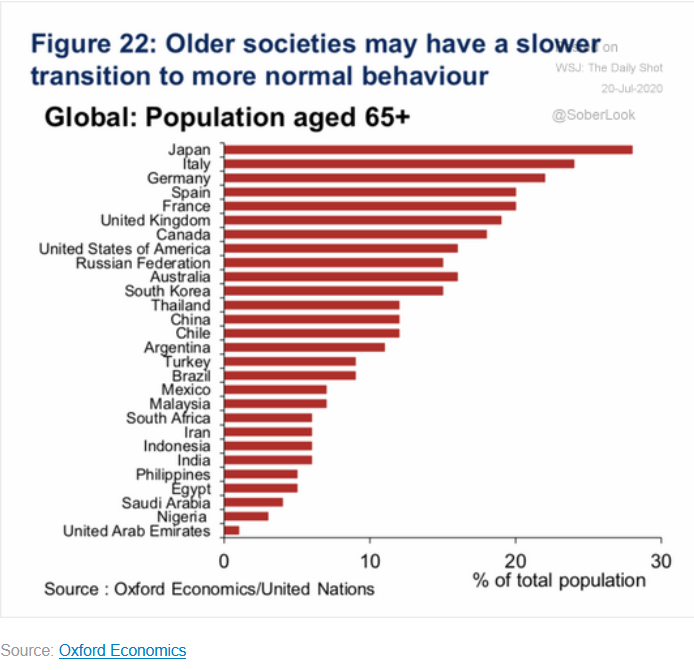 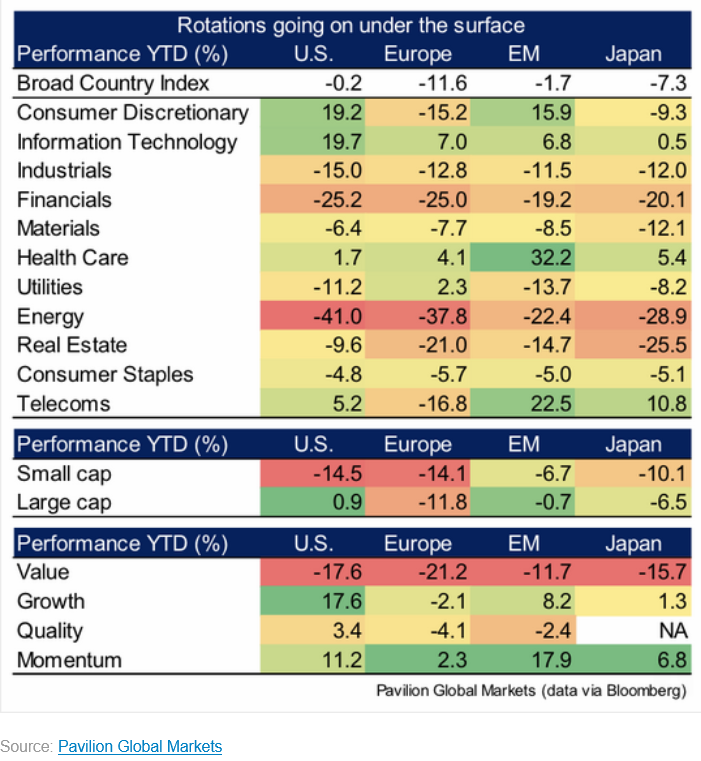 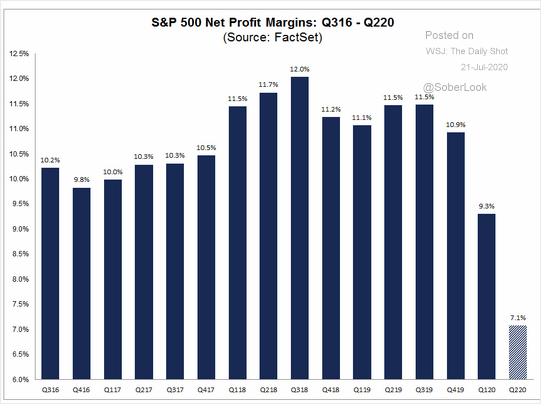 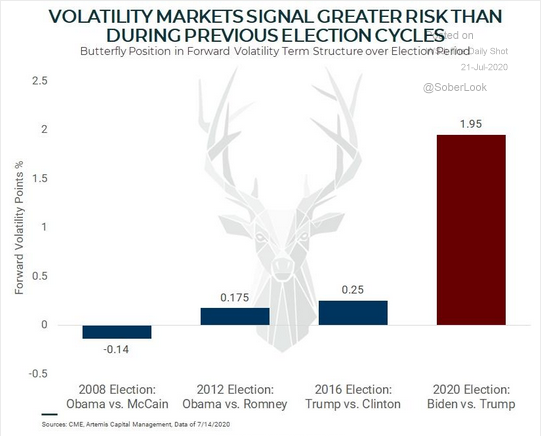 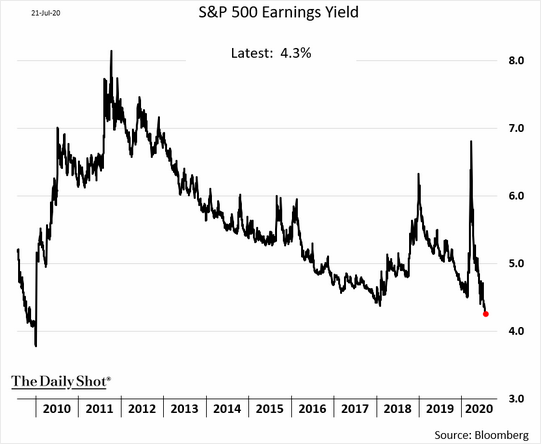 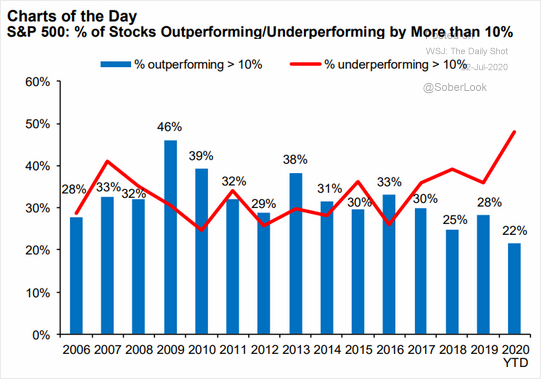 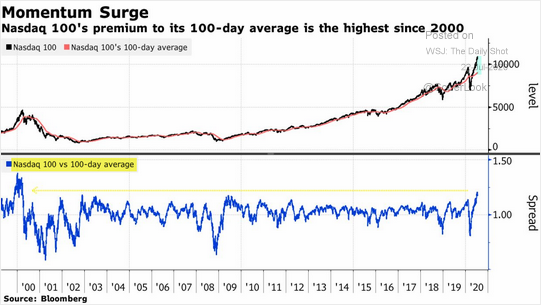