The Truth About Buy And Hold

The Truth About Buy And Hold

The buy and hold strategy is an age old, time-tested way to make decent returns in the stock market. Historically, purchasing stocks in companies that were profitable and had a good reputation would, over time, lead to healthy returns and favorable tax treatment through the capital gains tax rates. This article will discuss the pros and cons of this investment strategy for retirees. Is the buy and hold strategy still the goose that laid the golden egg, or does the lack of downside protection put retirees at risk of losing their hard-earned nest egg? 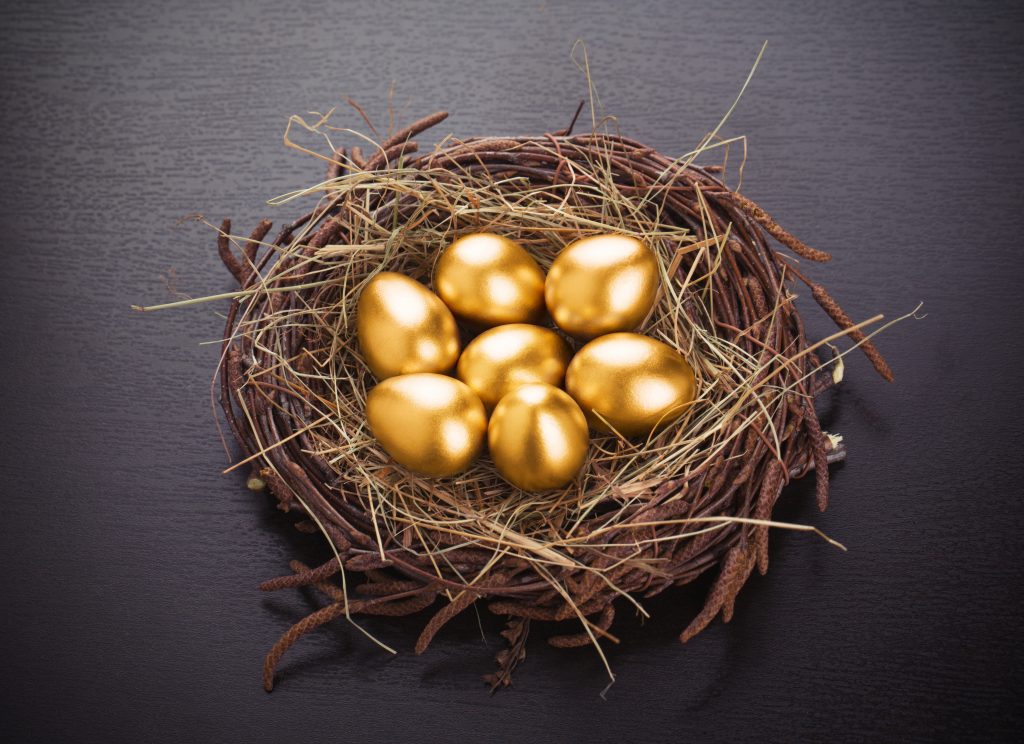 For young investors with a long time horizon, the buy and hold strategy has some great advantages compared to more active investing styles. Holding onto shares of a single stock in a standard brokerage account for 12 months or longer allows investors to pay gains at the “Long-Term Capital Gains Tax Rate.” In 2019, the current capital gains tax rate for a single filer is 0% for those making under $39,375 annually, 15% for those making between $39,376 and $434,550, and 20% for those making $434,551 and more. Comparing this tax treatment to paying at ordinary income tax levels, the buy and hold strategy could save a savvy high earning investor thousands of dollars.

Another benefit to the buy and hold strategy is the low cost due to lower management fees. Starting early October 2019, the major brokerages removed account and trading fees for investors that made trades on their own. Investors are now able to purchase undervalued stocks at no additional cost past the stock’s market value, and hold for years to come.

The first downside to the buy and hold strategy is the downside volatility of the market. Make no mistake, volatility is no friend to retirees. Retirees need the money from their investments to pay for their living expenses and lifestyle. In down market years, taking income from those assets can destroy future earnings and the ability to recover losses. In up market years, taking income from a fluctuating account will hamper its growth. Flat and choppy markets can also reduce the earnings of a buy and hold portfolio. Looking at the figure below, an investor who held the S&P 500 between 1969 and 1993 would have had no growth. In a period of 23 years, this could ruin a retirement. 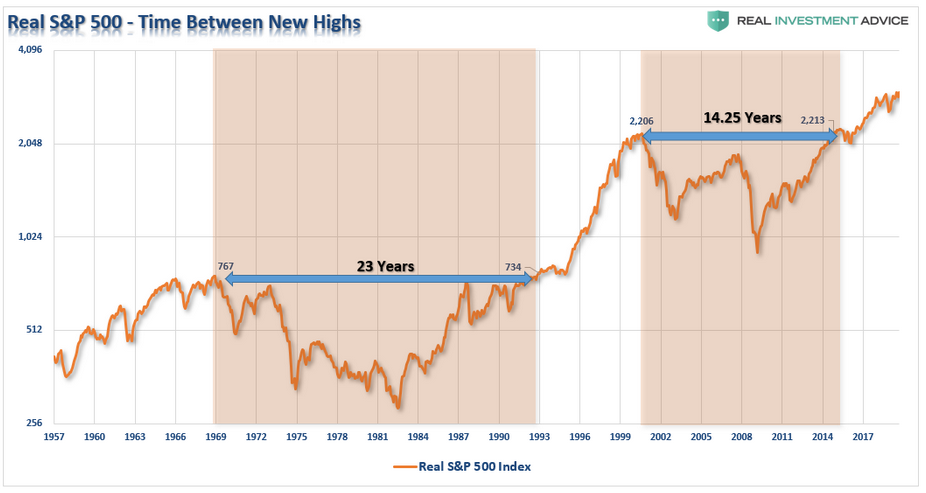 Another issue with the buy and hold strategy is that the returns have been decreasing. According to Hugo Scott-Gall, a Goldman Sachs Managing Director, “The returns from owning and holding quality companies have fallen markedly.” He states that from 2005 to 2011, the top 20 percent of companies as measured by return on capital outperformed their sector by 13.1 percent per year during that time period. The same strategy only beat its peers by 2.5 percent per year from 2010 to 2016.

The lack of downside protection leaves retirees with significant loss potential late into their lives and well past their working years. “Look at GE, easily the “bluest of the blue chips.” Can you imagine building a huge retirement nest egg in GE over 30 years only to see it drop 75% in 2 years?” (A question asked by Brian Decker, founder of Decker Retirement Planning). If you held GE on October 6, 2000, each share owned would have been worth $59.44 at close of market. Nineteen years later on October 7, 2019, each share would only be worth $8.56, a decrease of more than 85%.

One of the most influential investors of our time is David F Swensen, the Yale endowment manager. According to “Chief Investment Officer” magazine, Swensen was listed third on their 2012 list of the 100 most influential institutional investors worldwide. According to investments.yale.edu, under Swensen’s guidance, the Yale’s investments have returned 12.6 percent annually over the last 30 years. What is he doing different than everyone else? 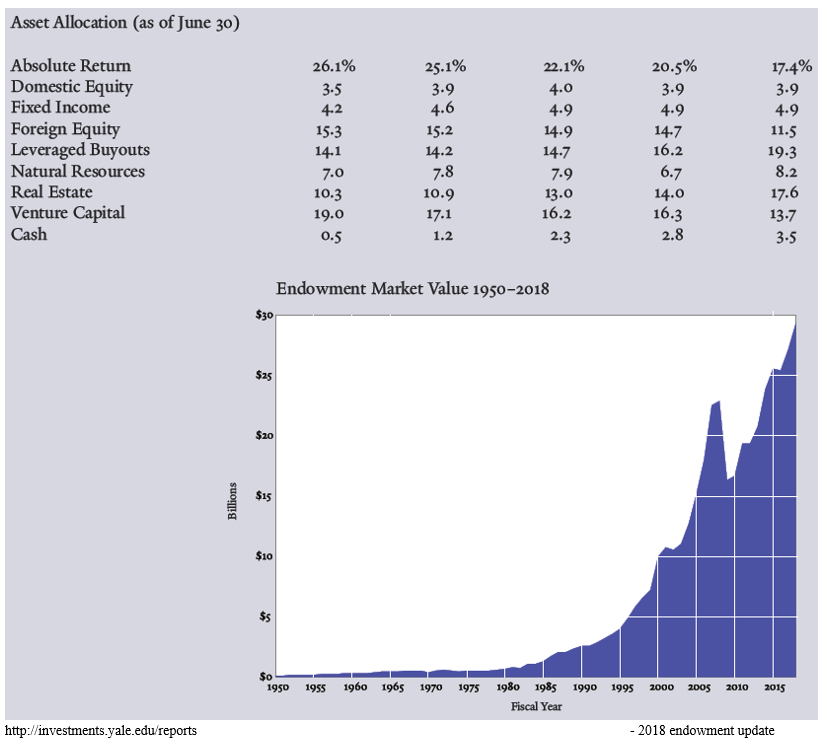 As shown in the chart above, Swensen has been decreasing domestic equity year over year, down to only 3.5% at the end of 2018. Why would a fund manager be doing this unless they believe domestic equities did not have the earning to risk potential that other investments had? Notice, however, “Absolute Return” holdings have been increasing drastically year over year, to now be over a quarter of the fund’s assets.

What does Yale consider an “Absolute Return?” An absolute return model diversifies among several securities and takes advantage of shorter trends in the market rather than the longer-term trends used by the buy and hold model. Basically, Yale is exploiting market inefficiencies through event and value driven strategies by building models that are designed to make money in up or down markets. This type of strategy is sophisticated but has been a key difference between the success of Yale’s fund and the overall market.

After the Great Recession of 2008, Yale’s fund reported a loss of 24.6%. Yale’s largest holding at the time was real assets, which lost 33.9%, but the fund faired better than the market as a whole in large part due to their Absolute Return model only showing a loss of 9.1%.

How to Take Action

The first step to any successful financial plan is talking to a professional. Talking to a fiduciary financial advisor, who legally must have your best financial interest in mind, can help set your retirement up for success. Diversify your holdings not just by risk, but also by their purpose. Ask yourself, when will I need to take income from them, and what is their purpose? You may need a very different type of investment for retirement income versus high growth versus leaving money to beneficiaries.