CLASSIC discussion of overpaying for a stock: Scott McNeely discussed the irrationality of paying 10x sales for a company in a 1999 Bloomberg interview, when he was CEO of Sun Microsystems: “At 10-times revenues, to give you a 10-year payback, I have to pay you 100% of revenues for 10-straight years in dividends. That assumes I can get that by my shareholders. It also assumes I have zero cost of goods sold, which is very hard for a computer company.

What were you thinking?”

Many of the most popular “growth” stocks fit this insanity. 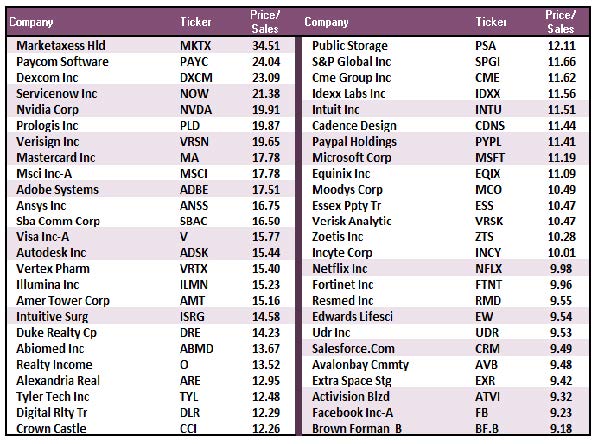 The 2020 federal deficit is rapidly approaching $3 trillion after the biggest monthly increase on record in June. 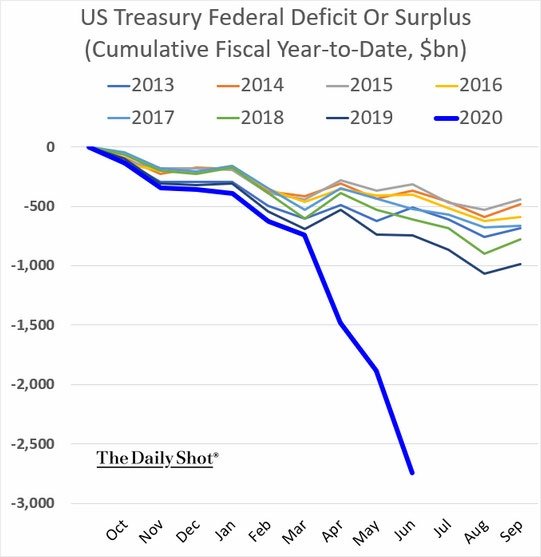 This chart shows federal receipts and outlays over time. 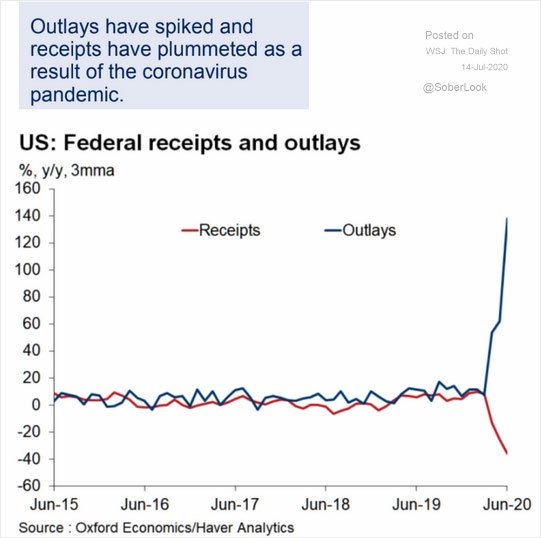 US mortgage delinquencies are soaring. The chart below doesn’t include mortgages that are in forbearance. 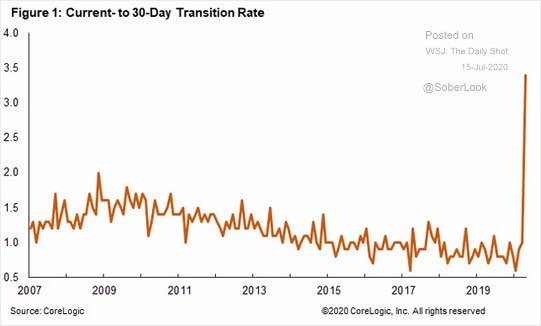 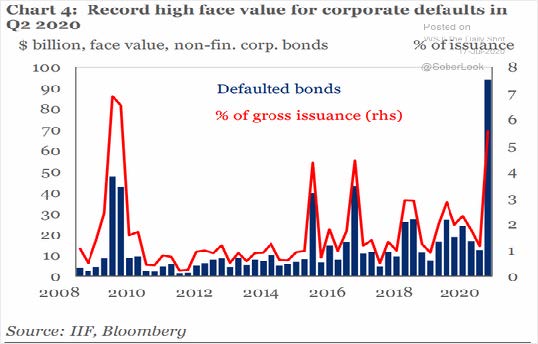 US bankruptcies continue to climb. 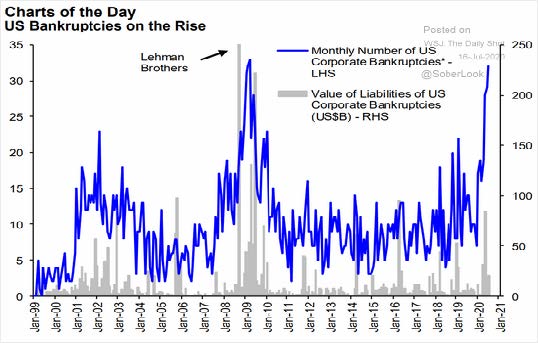 Here are the states with the highest and lowest percentage of past-due mortgages. 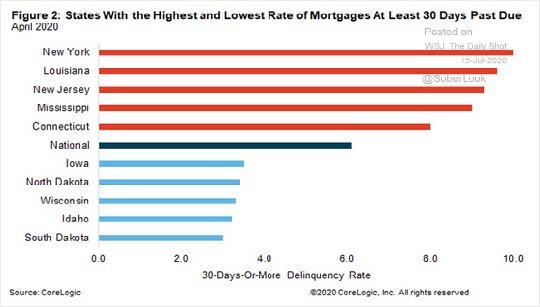 If the economy can’t recover unless consumer spending does, this next chart is problematic. It shows the average consumer credit and debit card spending, indexed to January of this year. As expected, we see a big drop coincident with the mid-March stay-at-home orders, followed by a slow recovery beginning in April. At the low point, spending was down almost 67% from January. By July 1, it was down “only” 33.8%. 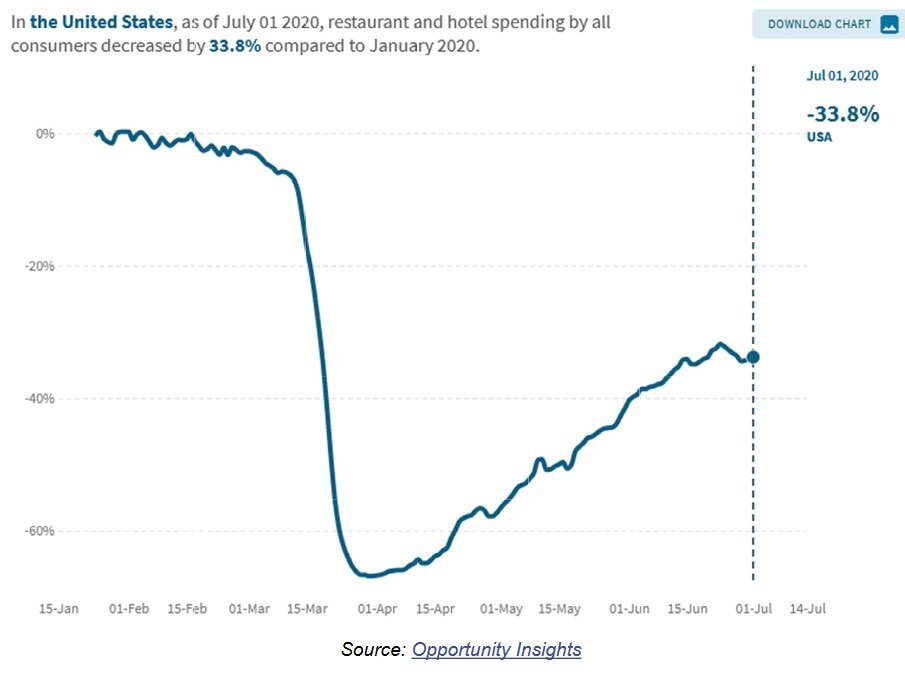 There are two problems here. One is that after three months, only about half the lost spending has returned. Some of it is lost forever, too. An unsold hotel room is a permanently missed opportunity. More ominously, spending began pulling back in late June, about the time COVID-19 cases began rising in some states. Now, with restrictions returning, it seems likely to fall again. When consumer spending will get back to January’s level is anyone’s guess, but it doesn’t look like soon. 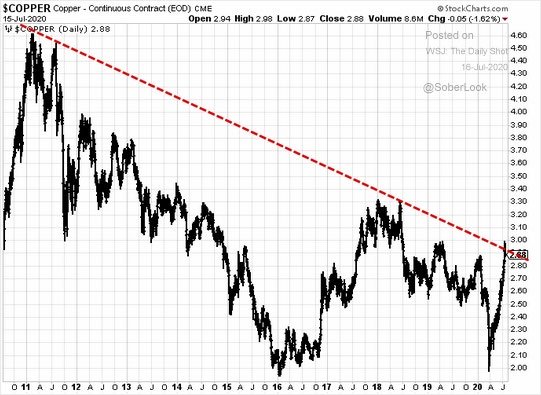 The future isn’t just happening, it’s happening faster. Washington policy expert Bruce Mehlman’s latest slide deck shows how technology, globalization, culture and politics are all combining to make 2020 a year like no other in US history.
Key Points:

Bottom Line: Crises have historically catalyzed reforms but they may not happen soon enough. Meanwhile the pandemic seems unlikely to wait. Other risks remain, too; Mehlman mentions cyberattacks, infrastructure failures and extreme weather events. His advice to corporate leaders: Trust is the most important brand attribute because you will be judged on how help in 2020. That sounds like good advice for individuals, too. 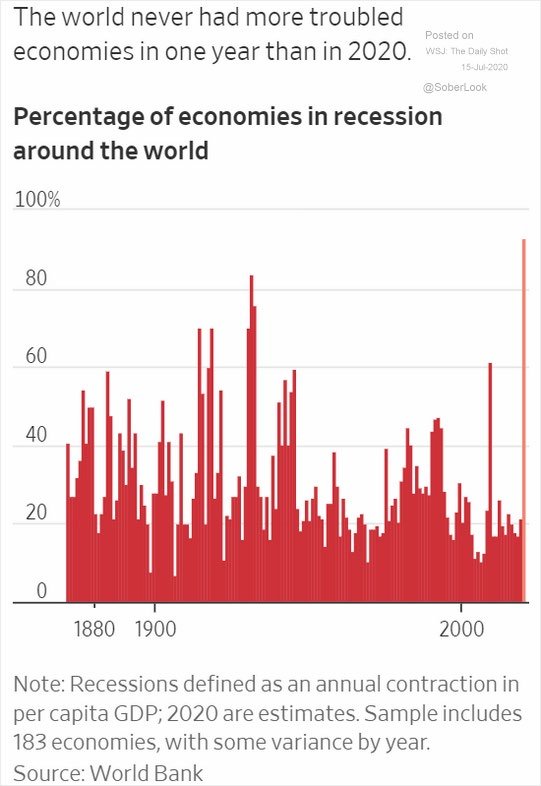 Expect extended low inflation/deflation, concurrent with high unemployment and sub-par growth.
Key Points:
A record 92.9% of national economies are now in recession. In 14 prior global recessions since 1871, the average was 54.3%. This slowdown’s synchronicity is unprecedented.

Bottom Line: A substantial deflationary gap has opened between potential and real GDP. Closing it will be difficult and time-consuming, which means persistent downward pressure on inflation and declining bond yields.

Four economic considerations suggest that years will pass before the economy returns to its prior cyclical 2019 peak performance. These four influences on future economic growth will mean that an extended period of low inflation or deflation will be concurrent with high unemployment rates and sub-par economic performance.

First, with over 90% of the world’s economies contracting, the present global recession has no precedent in terms of synchronization.
Therefore, no region or country is available to support or offset contracting economies, nor lead a powerful sustained expansion.

Second, a major slump in world trade volume is taking place. This means that one of the historical contributions to advancing global economic performance will be in the highly atypical position of detracting from economic advance as continued disagreements arise over trade barriers and competitive advantages.

Third, additional debt incurred by all countries, and many private entities, to mitigate the worst consequences of the pandemic, while humane, politically popular and in many cases essential, has moved debt to GDP ratios to uncharted territory. This ensures that a persistent misallocation of resources will be reinforced, constraining growth as productive resources needed for sustained growth will be unavailable.

Fourth, 2020 global per capita GDP is in the process of registering one of the largest yearly declines in the last century and a half and the largest decline since 1945. The lasting destruction of wealth and income will take time to repair.

Is Bankruptcy for Large Business a Good Thing?

Now we are trying to save those large companies. Some deserve it, I’m sure. But which ones and how many? You may remember Global Crossing. In the 1990s investment mania, it spent billions of dollars on undersea data cables, connecting the world. The data didn’t materialize fast enough, and Global Crossing went bankrupt. The new owners used the now-cheap assets to sell lower-cost connectivity. Huge losses for those investors, for which we should all be grateful, helped fund the era of cheap international communications.

The same happened with railroads in the 1870s. There was a mania by states and local governments to fund railroads connecting their cities and states. Every one of them went bankrupt, with the exception of one privately funded company (another story for another day about government programs). The bankrupt railroads with new owners offered cheaper travel which opened up the West.

The point is, keeping companies from going bankrupt is not always best for consumers and the economy. Now we are in different times. This is a crisis of unbelievably different and epic proportions. But the current “mania” to save all large businesses because they represent jobs should not become a habit. Fighting Mother Nature—or creative destruction—is not a good practice.

I want to end with a suggestion. Especially if you are retired, think about small, independent businesses where you spend money. Maybe a favorite bar or restaurant, a retail store, barber shop, or anything else. The owner is probably having a rough time right now. Find a chance to speak privately and see if you can help. Maybe you have capital, expertise, or other resources the business owner can use. Just offer whatever help you can, on whatever terms make sense for you.

Small business owners have their hands full even in normal times. Right now, they need all the help they can get. And we will all win by helping them pull through.

In March, the Federal Reserve System came to the country’s rescue, announcing they would buy mortgage-backed securities, investment-grade corporate bonds, and even junk bond exchange-traded funds (ETFs). The Fed created a $750 billion “Corporate Credit Facilities” kitty to be used to stabilize the markets. Considering there is roughly $6
trillion in corporate bonds and another $1 trillion in high-yield bonds, that’s a big number. What’s notable is that the Fed has used just $42 billion of that $750 billion, and just $10.7 billion of that was used to buy corporate bonds. There is a lot more firepower to be spent, however that cash kitty is due to expire on September 30, 2020. But it won’t expire.

The Fed has embraced a “whatever it takes” mentality, and I suspect the facility will be extended. And there is more… at the last Federal Open Market Committee meeting, the Fed said they would buy between $250 and $500 million in commercial mortgage-backed securities (CMBS). These are fixed-income investment products that are backed by mortgages on commercial properties, as opposed to residential real estate. Large retail bankruptcies abound. Landlords are in trouble. No, it won’t expire on September 30, 2020.

The Fed’s balance sheet expansion has been THE reason for markets to explode to the upside. Over the last couple of months, the slowing rate of advance for the market has coincided with a reduction in the Fed’s “emergency measures.” 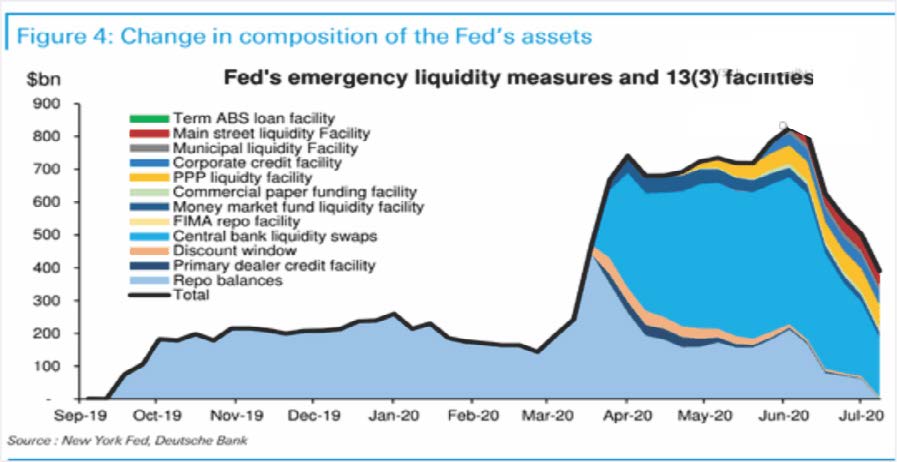 The limit to the Fed’s QE program is the government’s treasury issuance. An improving economy increased tax revenues, and improved outlooks began limiting the Fed’s ability to engage in more extensive monetary interventions.

Jerome Powell noted the Fed has to be careful not to “run through the corporate bond market.” The Fed is aware if they absorb too much of the treasury or corporate credit markets, they will distort pricing and create a negative incentive to lend. Such impairment would run counter to the very outcome they are trying to achieve.

As noted last week, there is already a “diminishing rate of return” on QE programs.

Instead, as each year passed, more monetary policy was required just to sustain economic growth. Whenever the Fed tightened policy, economic growth weakened, and financial markets declined. The table shows it takes increasingly larger amounts of QE to create an equivalent increase in asset prices.

Loan loss provisions at the largest US banks spiked in the second quarter. 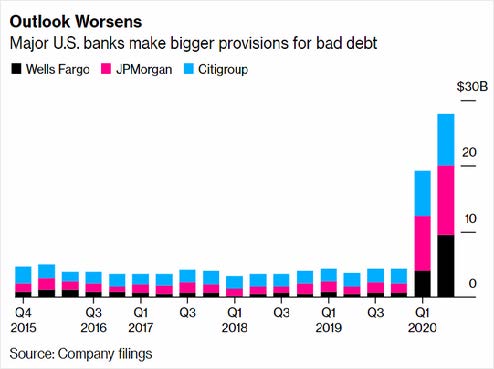 The current advance is not built on improving economic or fundamental data. It is largely built on “hope” that: 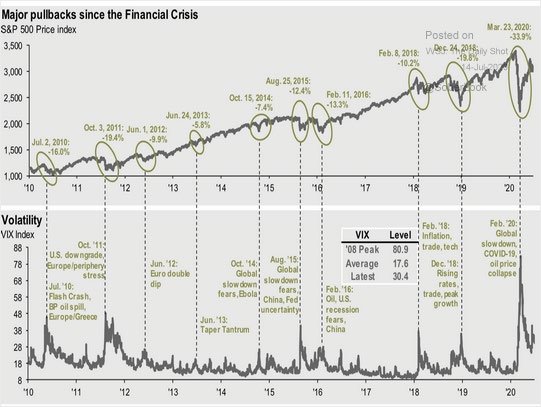 The S&P 500 return attribution by sector over the past five years. 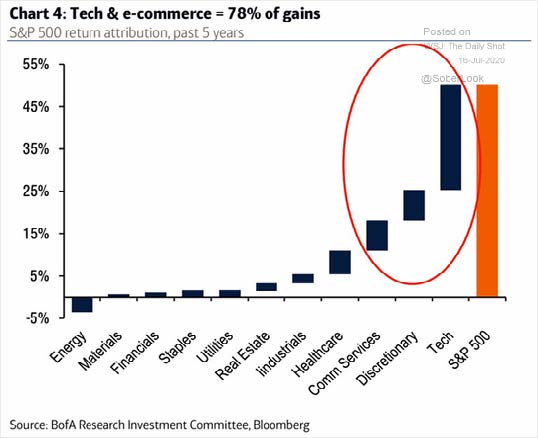 Tech fund inflows have been unprecedented. 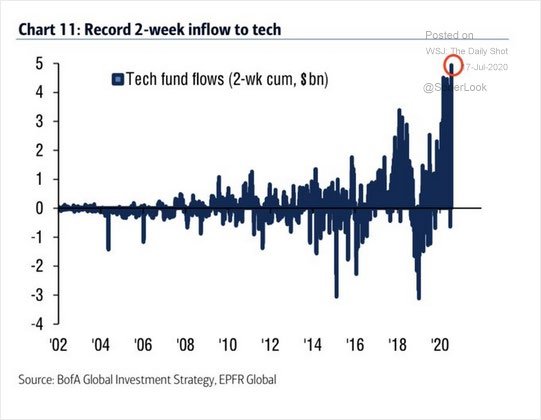 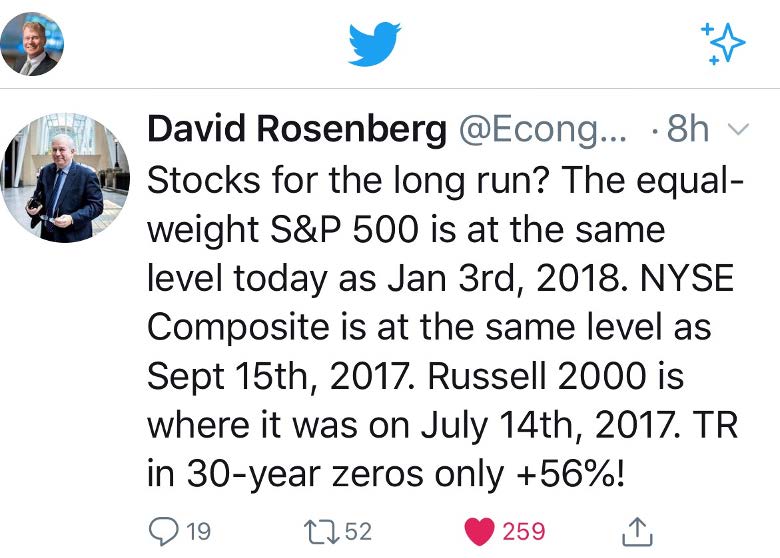