Negative interest rates mystify Howard Marks, along with the rest of us. In this summary, he considers why they are arising and what the impact will be. He makes some connections you probably won’t see elsewhere.

Bottom Line: Marks says the solution to a negative rate investing environment is to buy things with durable cash flows. The challenge is finding them at reasonable prices. We are having to rebuild all our assumptions, so accurate predictions are even harder than ever.

China’s GDP (Gross Domestic Product) growth dropped to a new 6.0% low last quarter, if we can believe the official stats, and the slowdown seems likely to continue. Yet, there are also signs of stabilization. Gavekal’s Andrew Batson reviews three possible sources of good news and what they could mean for China and the world economy.

Bottom Line: Chinese economic indicators should stop getting worse in the next few months, but there is little reason to expect a significant growth spurt. Much like the US and Europe, aggressive stimulus appears to be reaching its limits.

The most liquid China large-cap ETF (FXI) has been testing (down trendline) resistance again. 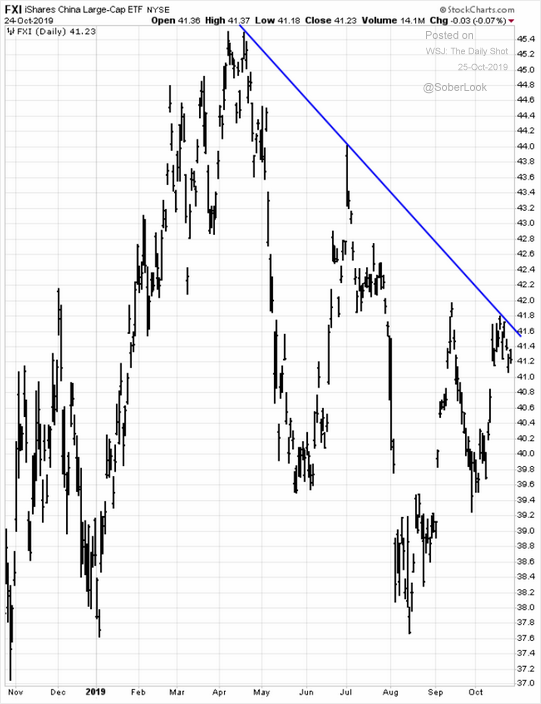 Six Things We Are Watching In The World Markets

First, worldwide economic growth is weakening, with some key markets approaching recession. This week, the International Monetary Fund (IMF) reduced its 2019 global growth forecast to 3.0%, the lowest since 2009 when recession was still underway. They think it will improve to 3.4% in 2020. That’s better than the alternative but not much of a recovery.

Note, that’s the global average, which would be lower without considerably above-average growth in China and India. IMF pegs US growth at closer to 2%, with Japan and most of Europe even lower. Problems in China could worsen the IMF’s outlook quickly.

Second, if you don’t want to believe the IMF (and there’s reason to be skeptical), look at global shipping trends. The economy is increasingly digitized, but the movement of physical goods is still its circulatory system. The latest Cass Freight Index data shows global blood pressure is dropping, when looking at the trends on both the total shipment and expenditures basis. Shipping volume has been down for 10 straight months on a year-over-year basis.

Third, monetary and fiscal stimulus is proving less effective. Not that it was so great last time, but it helped. It also had side effects that may have reduced its usefulness. You can’t force credit on those who don’t want or need it, even at zero or negative rates. The European Central Bank and Bank of Japan are learning this the hard way.

On the fiscal side, the 2017 US corporate tax cut helped, but the trade war offset some of it. Other countries, because they don’t have the dollar’s “exorbitant privilege,” have less fiscal flexibility than the US. Hence we see, for instance, Mario Draghi practically pleading with European governments for more stimulus spending and those governments shrugging their collective shoulders. They can’t do it.

Fourth, the US budget deficit is huge and growing. As I’ve shown, a recession in the next few years will likely push it far higher as revenue drops and spending rises. The Treasury’s increased borrowing is also having an effect on credit markets.

The investors who aren’t plunging into stocks seem to be holding more cash. Money market balances have been creeping up. A little caution might seem to be in order, but it matters where investors store their cash. If it’s not available for the banking system to grease its wheels, bad things can start happening. (More on that in a minute.)

Fifth, we are starting to see confidence break in important corners of the capital markets. The WeWork IPO (Initial Public Offering) turned into a fiasco. In fact, the entire company looks just like the train wreck Grant Williams said it would be. I don’t see how anybody could look at the business model of WeWork and not see an obvious hustle. What does that say about the supposedly brilliant venture capitalists who threw cash at the company? Nothing good. Though, maybe they knew what it was and just figured they could flip their shares to the public before it fell apart. If so, they appear to have been wrong.

But, the broader point is that once-invincible Silicon Valley unicorn companies are losing their allure. It turns out business success is hard when you have to actually, you know, generate more revenue than expenses. Other WeWork-like stories are probably coming. Nor is it just unicorns; look at Boeing’s struggle to fix the 737 Max planes and the shortcuts we are learning it took. These are bad signs for a market that needs earnings growth if it is to maintain current prices, much less see them rise further.

Sixth, as I was wrapping up this email, the latest Ambrose Evans-Pritchard column hit my inbox. He read the IMF’s latest financial stability report and came away with a distinctly darker view:

The International Monetary Fund has presented us with a Gothic horror show. The world’s financial system is more stretched, unstable, and dangerous than it was on the eve of the Lehman crisis.

Quantitative easing, zero interest rates, and financial repression across the board, have pushed investors—and in the case of pension funds or life insurers, actually forced them—into taking on ever more risk. We have created a monster.

There are ‘amplification’ feedback loops and chain-reactions all over the place. Banks may be safer—though not in Europe or China—but excesses have migrated to a new nexus of shadow-lenders. Woe betide us if this tangle of hidden leverage is soon put to the test.

According to the IMF, globally there is about $19 billion of “debt-at-risk,” in which a global slowdown and/or recession would render borrowers unable to make their payments. I have written a great deal about the high-yield and leveraged loan market in the US, but globally it is much worse.

“In France and Spain, debt-at-risk is approaching the levels seen during previous crises; while in China, the United Kingdom, and the United States, it exceeds these levels. This is worrisome given that the shock is calibrated to be only about half what it was during the global financial crisis,” it said.

…In Europe, almost all leveraged loans are now being issued without covenant protection. The debt to earnings (EBITDA) ratio has vaulted to a record 5.8. Is the ECB (European Central Bank) asleep or actively promoting this?

The IMF’s directors call for “urgent” action to stop these excesses, but in the same breath, suggest/admit that the cause of leverage fever is the easy money regime of the authorities themselves. That is to say, the central banks and their political masters who refuse, understandably, to permit debt liquidation and to allow Schumpeter’s creative destruction to run its course in downturns.

Don’t think it can’t happen. There will be canaries in the coal mine that will chirp before the dominos start falling, and we will sound the alarm LOUD and CLEAR.

Where Are We In This Market Cycle

Howard Marks, CFA, is Co-Chairman of Oaktree Capital—the firm he founded in 1995—and one of the most successful hedge fund managers in the business. He comments on the market cycle here:

The current economic cycle is more than 10 years old—the longest on record. By almost all measures, equity market valuations are near record highs. The length of the cyclical bull market is now the longest in history. And, most significant, we sit at the end of a long-term debt accumulation cycle. Moments like this one are problematic. That’s the bottom line.

Here we are based on market valuation in a long market cycle. The higher the valuation, the lower projected future returns: 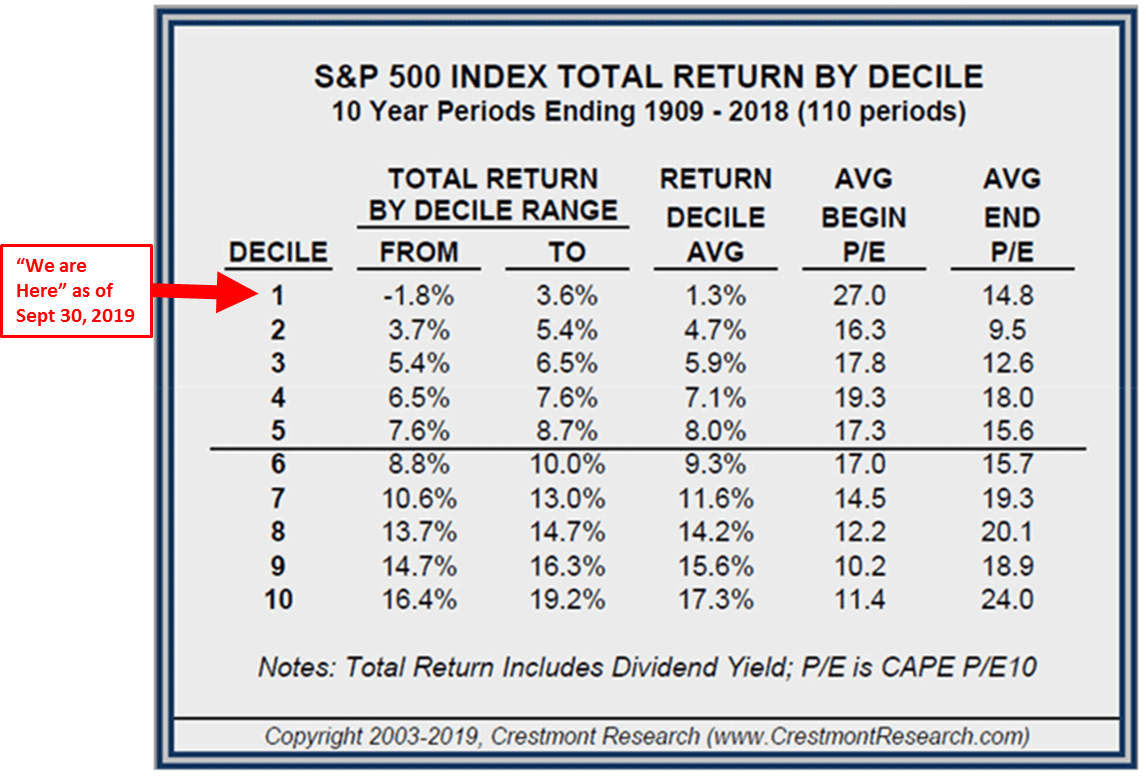 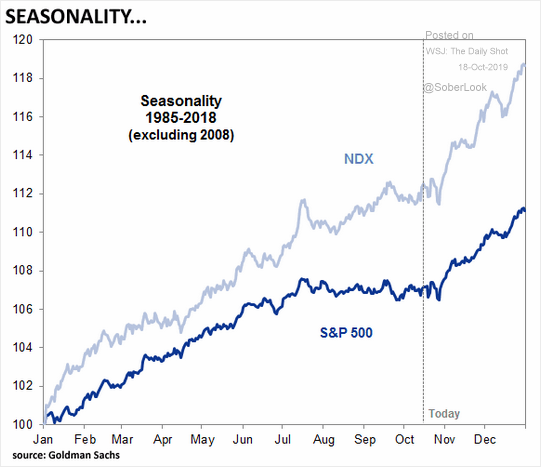 The chart below shows the gain of $10,000 invested since 1957 in the S&P 500 index during the seasonally strong period (November through April) as opposed to the seasonally weak period (May through October). 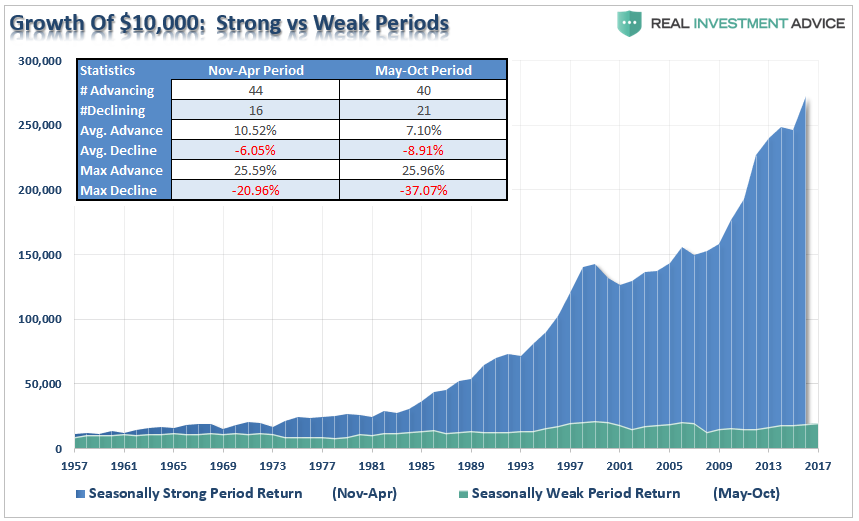 The Good News Of The Current Market Advance

If You Are A Bull, What’s Not To Love?

The S&P 500 trading volume has been declining, which could create a liquidity problem during the next selloff. 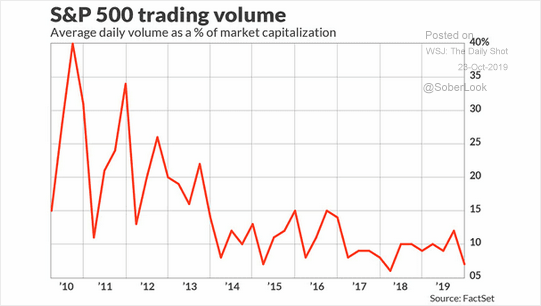