At some point, an economic problem deepens so much that the piper has to be paid. Both in the U.S. and globally, one of those problems appears to be mountains of debt.

Current global debt levels are simply not sustainable. Debt actually is sustainable if the debt is used for projects with positive returns and if the economy supporting the debt is growing faster than the debt itself. But neither of those conditions applies today.

In other words, most of the global debt we’re racking up isn’t being used for productive purposes. Instead it’s being used to service “benefits, interest and discretionary spending,” according to Rickards.

This debt growth should continue. According to the Institute of International Finance (IIF), global debt is expected to pass $255 trillion by the end of this year, and they don’t see the pace of debt accumulation slowing down.

In fact, you can see how the official global debt has already skyrocketed from about $80 trillion in 1999 to this new record.

Zero Hedge reports that, by year’s end, the global debt will be “roughly equivalent to a record 330% of global GDP.”

With debt outpacing growth by such a large margin, we are fast approaching a day of reckoning.

The bank says that we’re in the fourth episode now, and their prognosis isn’t good. In fact, they called the failure to properly manage the global debt “complacency”:

“The increase in debt globally has already been larger, faster, and more broad-based since the Great Financial Crisis than in the previous three waves. This should be seen as a leading indicator for the possibility of financial crises ahead and shake up the complacency that is evident in macroeconomic policy making today with regard to increasing levels of both public and private debt.”

Jim Rickards thinks the “trigger” for an imminent global debt crisis, if one happens, would boil down to rates:

Low interest rates facilitate unsustainable debt levels, at least in the short run. But with so much debt on the books, even modest rate increases will cause debt levels and deficits to explode as new borrowing is sought just to cover interest payments.

Four Charts That Could Define The Next Decade

are one of the more “mean reverting” series in the financial markets. Decades of high returns are inevitability followed by subsequent low, and even negative, returns. Buy and Hold will not work for retired investors during this period. 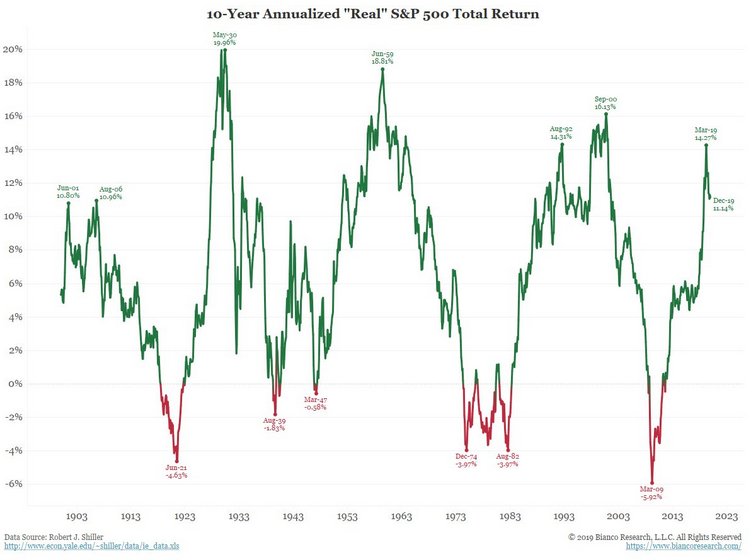 2 – Household Net Worth as a Percentage of GDP

is pushing record levels. While not in itself a “bad thing,” the benefit has been confined to the top-20% income earners. Importantly, asset growth has far outstripped economic growth which is unsustainable long-term. This series too, will mean revert. 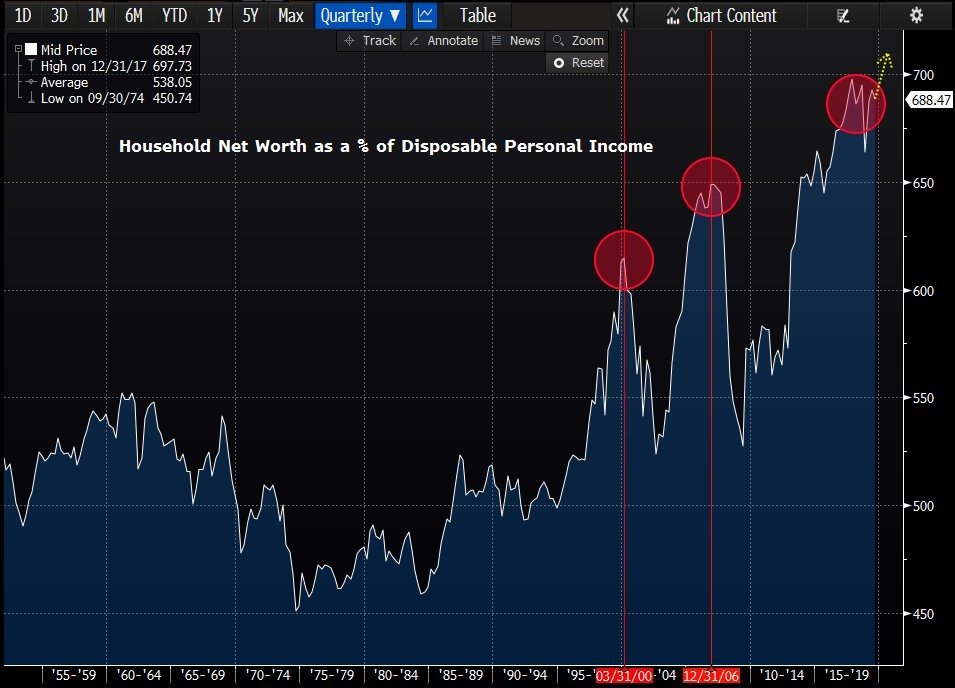 is also pushing unsustainable levels. Debt ultimately has to be “cleared” before the system can re-leverage for the next growth cycle. The next reversion cycle will be brutal on a large number of publicly traded companies which have relied on “cheap debt” to sustain poor fundamental business models. Be careful what you own. 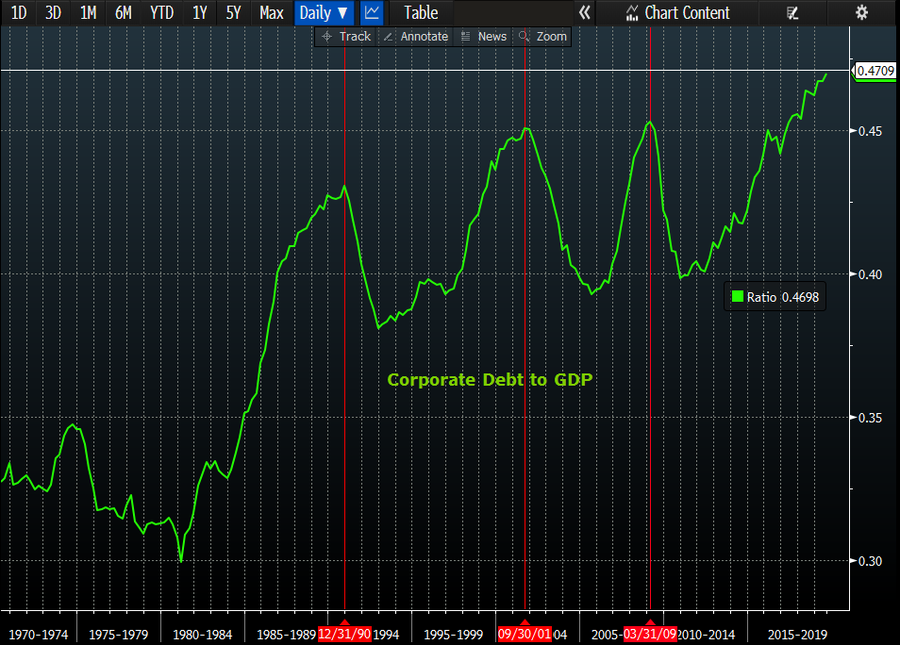 Can Seem Rational in the heat of the moment. However, when “reality”inserts itself, the eventual reversion tends to be brutal. 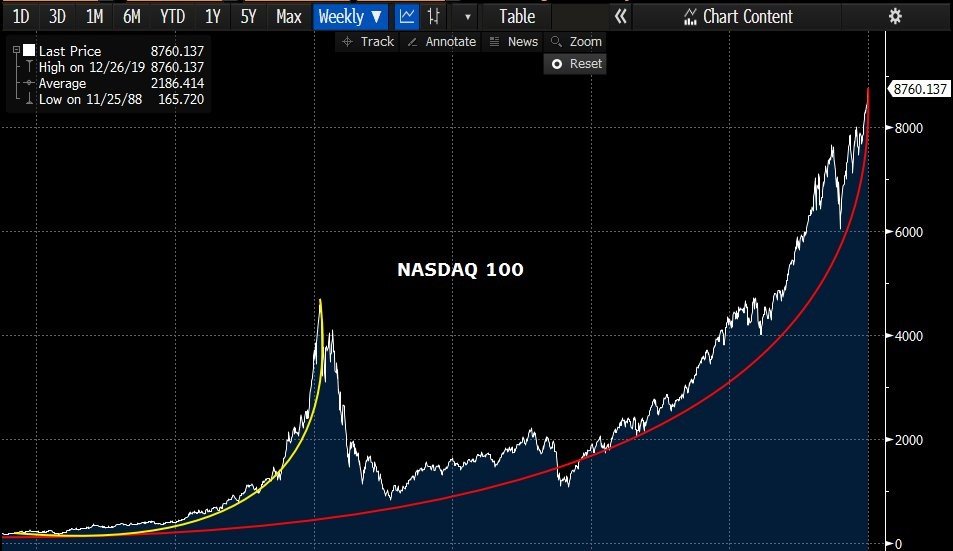 What You Need to Know About The SECURE Act

The week before Christmas has been just a little busier than usual. Even with all of the additional political hubbub, it looks like politicians did have time to get one thing done: The SECURE ACT.

The SECURE ACT has finally been sent to President Trump’s desk to be signed. This bill does accomplish several good things for small businesses and the average worker, but it does eliminate one key element for IRA beneficiaries which is the ability to stretch IRA funds generationally. Currently, non-spouse beneficiaries have the ability to stretch distributions from an inherited IRA over their life span. Unfortunately, with the passing of SECURE ACT this is no longer the case. Now, non-spousal inherited IRA funds must be distributed within a 10-year time frame. Who’s the winner here? It’s clearly Uncle Sam as they find more ways to get their hands on your hard-earned dollars. This is just another reason to explore Roth conversions and to take a hard look at where you park your funds. I fear having the flexibility of where to take distributions from will become all the more valuable in the coming years.

SECURE will take effect on January 1, 2020. Here are the highlights:

The Labor Force Participation Rate growth rate for those age 75 is up 76% since 2000. There are many reasons for this with the most prominent being this cohort needs the money.

The SECURE Act gets traditional IRAs in line with traditional 401(k) and Roth IRAs and will allow working older Americans, 70.5+, to continue to contribute to their pre-tax retirement accounts. Let me say this is no big deal. In fact, I’m very concerned this provision may lead retirees along with advice from mainstream financial professionals, to continue to overfund pre-tax accounts for absolutely no reason.

(RMDs). Simply, if you haven’t turned 70.5 by the end 2019, you’ll be provided the privilege to wait until 72 to begin required minimum contributions. On a positive note, at least it’ll be easier for people to figure out when to begin their RMDs.

On a disappointing note, why older Americans who remain or return to the workforce are required to take distributions when they should be given the choice to wait is the most egregious ignorance of the tax elephant in the room and the issues seniors face today when it comes to making ends meet, in my opinion.

The Act should have allowed older employed Americans to postpone distributions until they, well, RETIRE.  However, we will need to make the best of it. Along with reform around life expectancy tables expected in 2021, many taxpayers should experience a bit of relief on taxes as life expectancies have increased.

We’ll break this down for you by date of birth.

Business as usual if you are already taking RMD’s. The SECURE ACT does not impact you. Continue to take your RMD’s as scheduled.

Winner, winner chicken dinner! The SECURE ACT does affect you. Your first RMD is now 72 instead of 70 ½.

3. The bill permits penalty-free withdrawals from retirement plans for expenses related to the birth of a child or adoption

I’m torn over this one as it adds another element of ‘leakage’ to accounts that shouldn’t be touched until retirement. However, if it assists a family to adopt a child, I’m compelled to support it. Now, Congress could have removed the penalty-free withdrawal provision for a first-time homebuyer as we believe at RIA, if you need to tap retirement accounts to make a down payment on a house you clearly can’t afford to own one. In addition, and I know we can argue about this all day, a primary residence is NOT an investment. It’s a consumption asset.

4. The bill creates a new three-year tax credit for small employers for startup costs for new pension plans that include automatic enrollment.

Occasionally, probably by accident, there’s a jewel among the government rubble.  The new bill allows for a $500 tax credit for small employers to start retirement plans that must utilize automatic enrollment. Empirical studies outline how auto-enrollment has increased retirement plan participation.

This Section will allow small employers to pool their resources to create 401(k) plans. A great dilemma we face as a country is lack of retirement plans available to employees of small companies.

Rarely, are guaranteed lifetime income options in the form of annuities provided in company retirement plans. Now, that can change. I fully support this initiative, but the endorsement comes with a caveat. I’ll explain.

First, overall this is a positive. The loss of pensions has clearly created a retirement saving crisis in America. To offer a lifetime retirement income option among the sea of variable assets of stocks and bonds is indeed a positive ballast.

However, if you believe your employer does a challenging job with the selection of mutual funds, just wait to see what happens with annuities. It’s going to be absolutely crucial (and I cannot stress this enough), that you work with a fiduciary partner with extensive insurance experience that can help you assess the annuity your employer selects and whether or not you should consider it.

This is a significant change. The SECURE Act will require owners of larger pre-tax retirement accounts who plan to leave a legacy to family through IRAs, to review and possibly restructure their estate plans, ideas, in the coming years.

Again, this is one reason why we focus so much on surgical Roth IRA conversions and favor Roth over traditional, pre-tax accounts in almost every circumstance. Sure, the accelerated distributions are the same. However, the acceleration of depletion due to taxes is a tremendous negative to the wealth you plan to leave to others.

Do you have a child or grandchild that has worked this year? No, we aren’t talking about those with babysitting or lawn jobs that never get taxed. The IRS defines earned income as “all the taxable income and wages you get from working… for someone who pays you or in a business you own.” Key word taxable.

You can contribute to a Roth or Traditional IRA depending on income limits, but considering they’re children let’s assume they fall under the income limits. With these assumptions, I would go with the Roth. Having the ability to put funds aside at a young age in an account that will grow tax free without income taxes taken out in retirement is a no brainer.

529 plans are an excellent way to put funds aside for college without the child getting control of the assets at the age of 18. A 529 plans biggest benefit is its tax-free growth if the funds are used for higher education.

Annual contributions to a 529 plan for 2019 can be up to $15,000 per year or a lump sum contribution of $75,000 for a 5 year period. Be careful not to trigger gift tax consequences. 529 plans are issued for each state, if you live in a state with state income tax check to see if your state plan offers tax benefits for your contributions. If you live in a state without state income tax pick the plan that’s most appropriate for you.

These gifts may seem boring and fall on deaf ears for the time being, but I can assure you as your kids or grandkids age they will be more valuable and meaningful than any toy or trinket they could receive.

After seeing dozens of 2020 forecasts, I found Michael Lewitt’s the most thought-provoking so far. Others try to cut through the fog; Lewitt explains why fog is the problem.

Lewitt concludes: “A global economy whose two largest economies are devoting increasing amounts of financial and intellectual capital to debt management is decidedly unhealthy.” True, and the debt is near-impossible to manage when the underlying assets are illusory or overvalued. The situation may not blow up in 2020 but still leads nowhere good.

Hedge funds have been boosting their exposure to US equities. The unwind of these positions could get ugly. 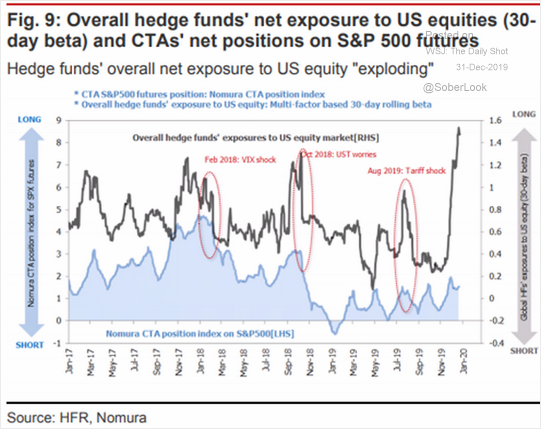 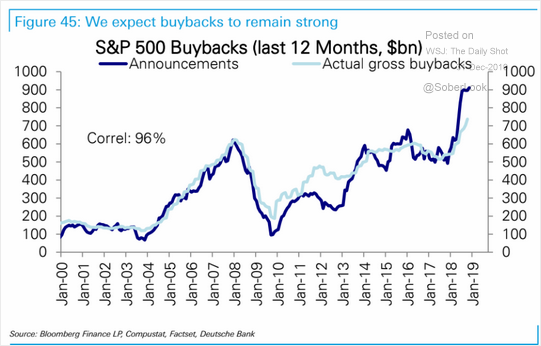 Good News for the Markets

Bad News for the Markets 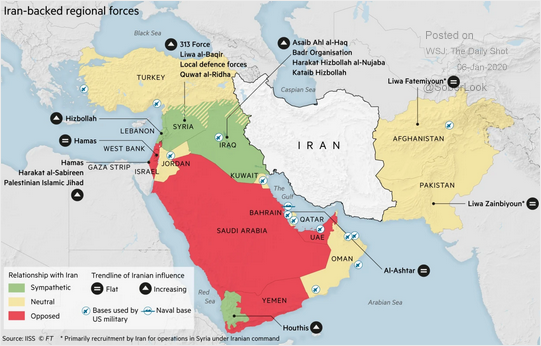