Build Back Better – What’s In the Bill?

Build Back Better – What’s In the Bill?

The nonpartisan Congressional Budget Office is out with its estimate for President Biden’s Build Back Better Act. The $1.75T social spending measure is the second installment of the administration’s economic agenda after an infrastructure package passed earlier this week to update America’s roads, tunnels and bridges. Democrats hoped to pass the bill in the House on Thursday night, but an hours-long speech by Minority Leader Kevin McCarthy prompted them to postpone the vote until this morning.

CBO analysis: The federal agency found that the Build Back Better Act would contribute $367B to the deficit over 10 years, though that doesn’t include $207B in revenue which could result from spending $80B on tax enforcement efforts at the IRS. Adding in those potential gains, the bill’s 10-year deficit still totals $160B. The new figures added fresh impetus for Republicans to unite against the bill, with McCarthy calling it, “the single most reckless and irresponsible spending in the history of this country.”

On the other side of the aisle, the Biden administration said IRS spending would generate $480B (not $207B stated by the CBO), and would even reduce the total deficit by $112B over the next decade. That would mean the bill would be a net positive for the national debt and many Democrats appear willing to accept that perspective. Complicated matters is the support from centrists like Sen. Joe Manchin, who has flagged its hefty price tag, and only time will tell how things will play out. Democrats hope to pass the bill via a special legislative process called reconciliation, meaning the entire support of the party’s members would be needed in the evenly divided Senate.

What’s in the bill? Universal prekindergarten, capping child care expenses, negotiating lower prescription drug costs and expanding tax credits for reducing carbon emissions. It would also impose a new 15% minimum tax on large U.S.-based corporations, create a 1% tax on stock buybacks and raise taxes on U.S. companies’ foreign profits. However, the bill would leave the corporate tax rate at 21% after pressure from Sen. Kyrsten Sinema, while basic individual tax rates would stay unchanged for all but top earners.

“If the $4 trillion House spending bill passes, the U.S. will have the highest combined federal and state personal income tax rate in the developed world. Under the Democratic plan, the combined U.S. top rate would climb to 57.4% by 2026. The U.S. would leap over 22 other countries in the OECD tax ranking, including Italy (47.2%), Sweden (52.3%), and even France (55.4%). Germany comes in at a relative bargain at 47.2%. Congratulations, America, you’ll be Number One.” —Wall Street Journal 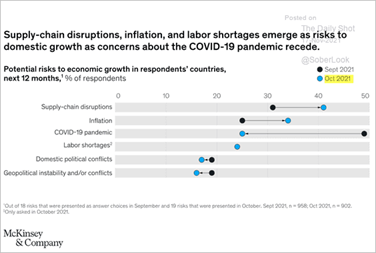 The debt ceiling jitters will return next month. 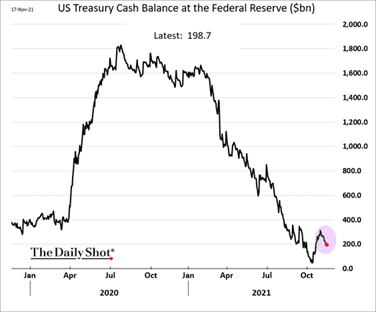 Unless you are a farmer you probably don’t think much about fertilizers. Yet fertilizer is a critical input to the global food supply, and it threatens to keep food prices rising well into next year. This matters both economically and geopolitically.

We asked an Iowa farmer we know to read this analysis. He said it matches his experience. He luckily ordered fertilizer early but still can’t get herbicides. Recently he drove 200 miles to get an urgently-needed tractor part, and expects more such problems. That’s just one anecdote but such stories add up to the higher prices you see in the grocery store, and the inflation spreading to everything else.

Media stories about rising wages typically frame it as an expensive problem for employers. This isn’t necessarily true. Most employers happily pay more when they also receive more from the higher-paid workers. Higher productivity can justify spending more. Unfortunately, US labor productivity is going the other direction. The government measures this by comparing total output with the total number of hours worked. Simple division shows how much the average worker produces in an average hour. In Q3 2021, productivity in nonfarm businesses was an annualized -5% compared with Q2. 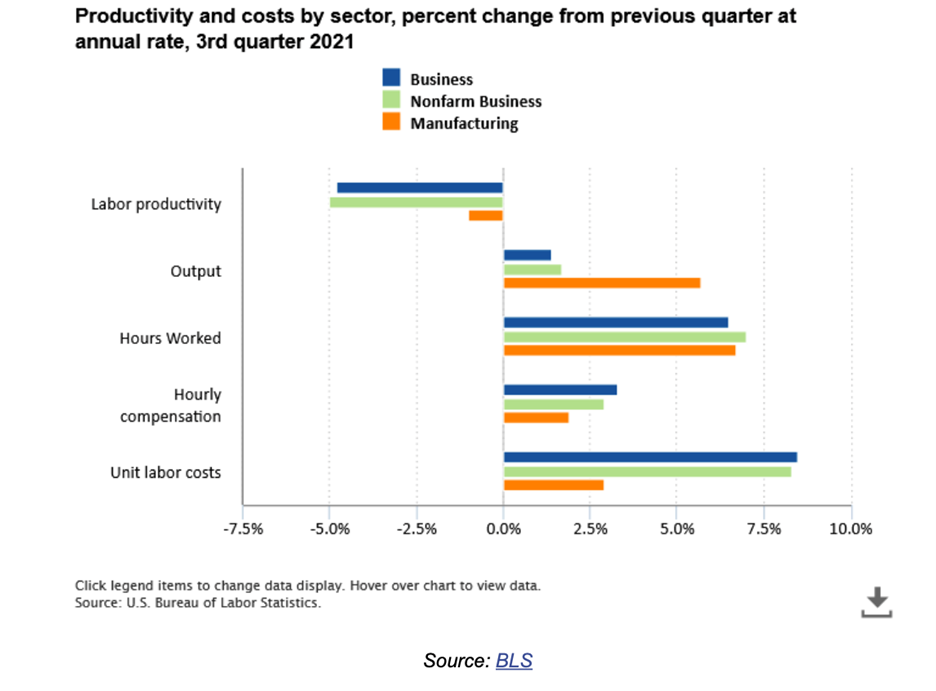 Meanwhile both hourly compensation and unit labor costs rose significantly. So this really is a dismal picture for employers. They are paying more and getting less. It’s no wonder some are in a foul mood. 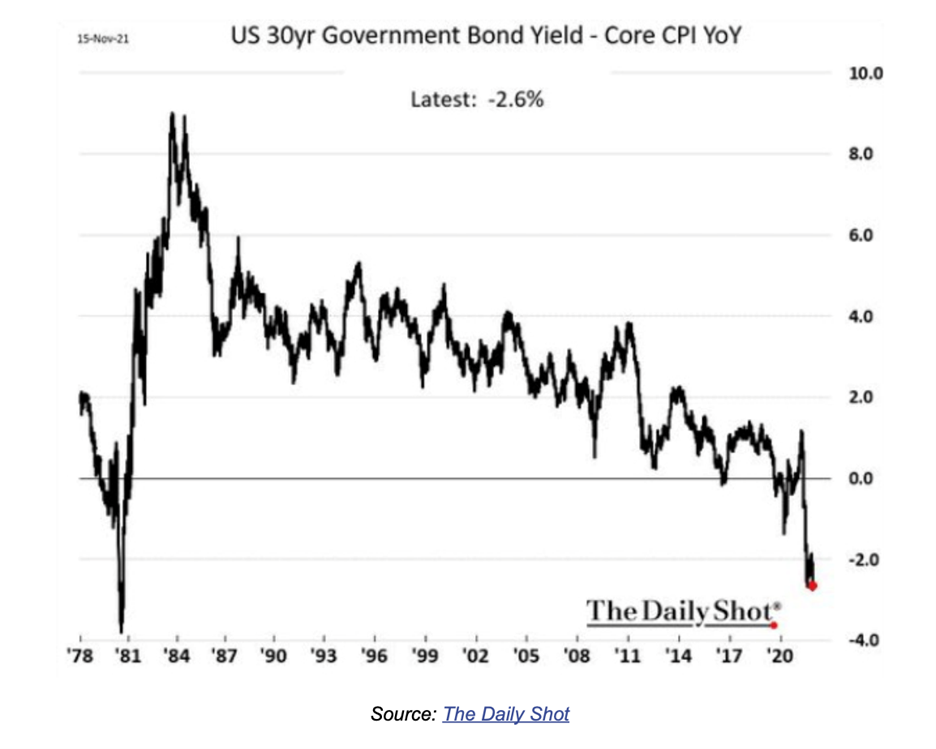 That’s not as crazy as it sounds, though. For one thing, many bonds are being purchased by the Federal Reserve and will stay on its balance sheet a long time, maybe until maturity. For another, bond buyers who are US taxpayers may get a benefit on the back end, since the government’s lower borrowing costs may mean taxes are lower than they would otherwise be. But the important part here is at the other end of the chart. The last time we saw such negative real bond yields was in 1980. They didn’t last long because Paul Volcker was aggressively stamping out inflation. That is not the case today, so this odd situation may persist longer than expected.

The is the New York Fed’s quarterly household debt tracker. The interesting part is what you don’t see: any impact from the pandemic. Squint and you may notice a little flat stretch in early 2020, but then debt resumed rising at about the same pace it was before. 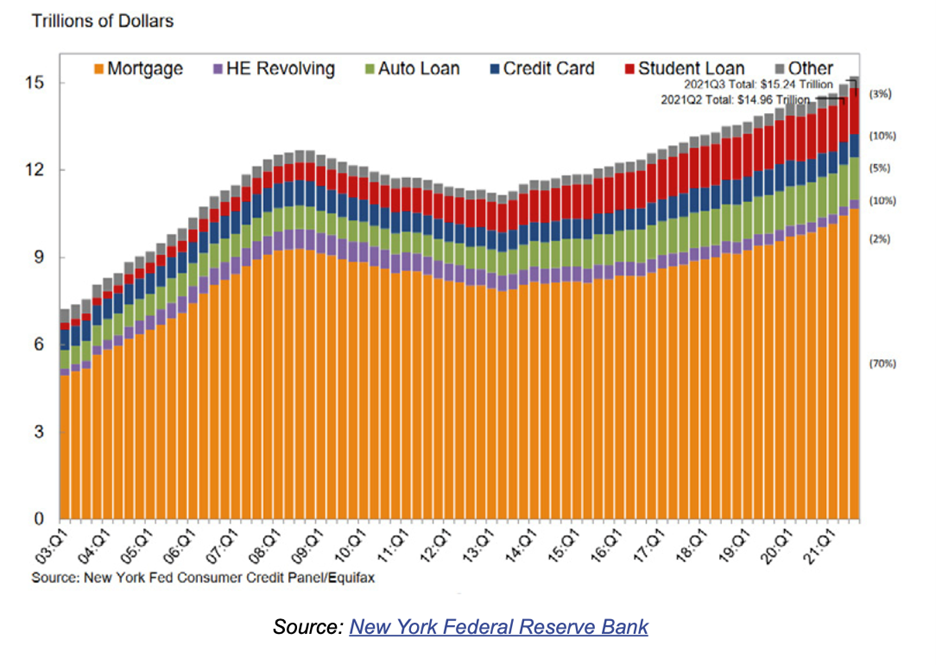 Many charts we show you have sharp, unmistakable COVID-driven divergences. But household debt—whether mortgage, auto, credit card, or student loans—has kept going steadily higher. There is one other notable point here, though. Mortgage debt, which retreated somewhat after the last recession, is now at a new high. Maybe all that debt people are taking on to buy expensive houses in a rising market will be sustainable. Or maybe not. 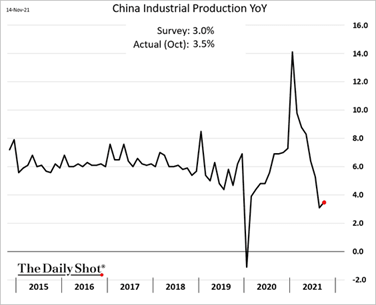 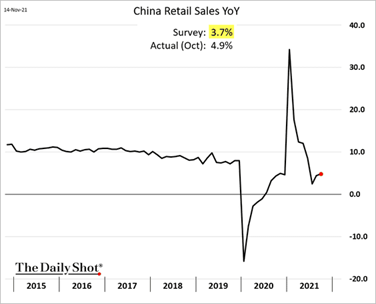 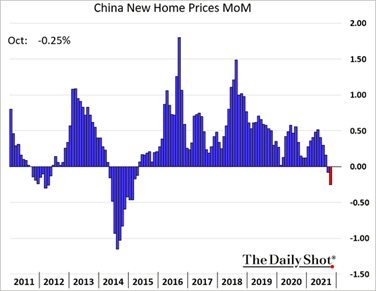 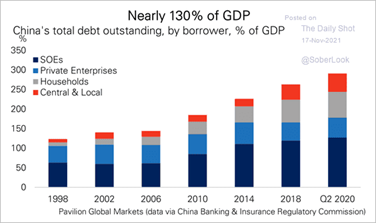 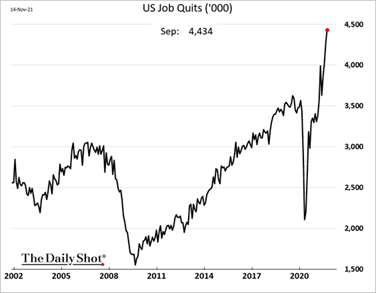 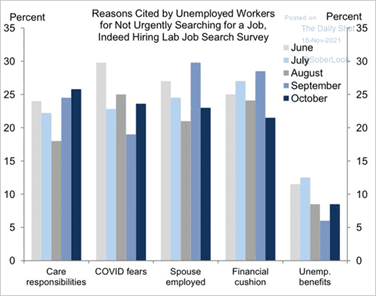 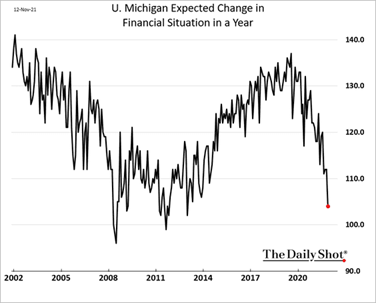 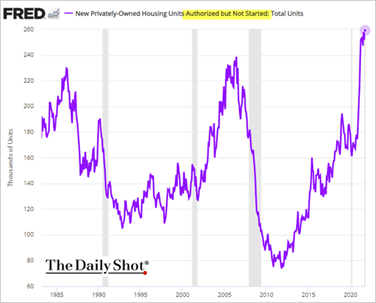 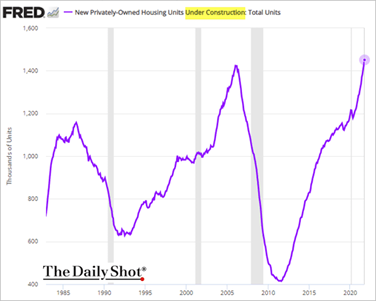 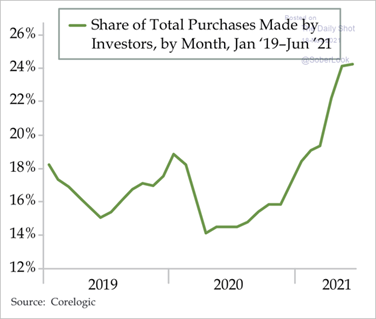 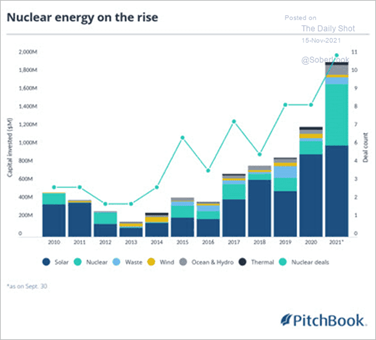 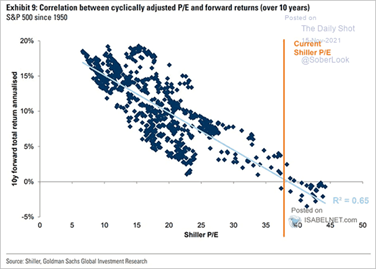 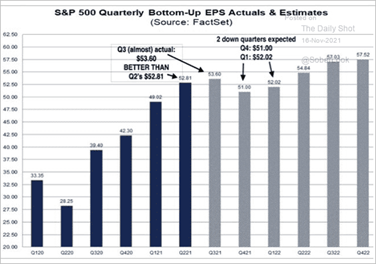 When the %Stocks > 20/50-EMAs is less than the SCI percentage, there is a bearish short-term bias. You’ll note all of these indexes have short-term bearish biases moving into next week.

The NYSE, Nasdaq and OEX have less than 40% of their stocks with price > 20-EMA and these numbers are getting worse each day. The SCIs on all four of these indexes had negative crossovers their signal lines this week.

The NYSE has a differential between %Stocks > 50-EMA and the SCI of 29%. The SCI will likely accelerate its decline next week. Remember that EMAs move toward price. If price is above, they move higher. If price is below, they move lower. You cannot get an improved reading on the SCI when fewer stocks are above their 20/50-EMAs. 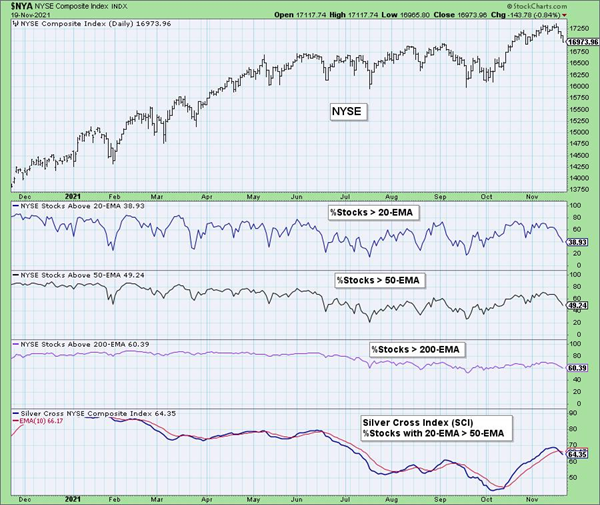 The Nasdaq has the weakest participation of the bunch with %Stocks > 20-EMA at a mere 35%. 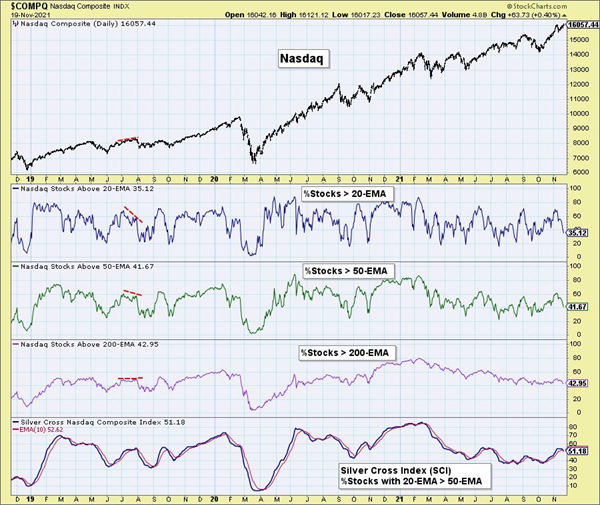 The SPX is the only index with %Stocks > 20-EMA sitting above 40% and that is still very weak. 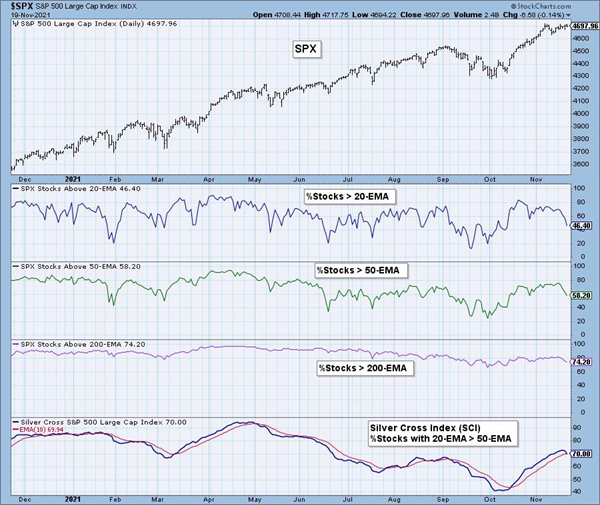 They have a winning standard of performance before they are winners.” 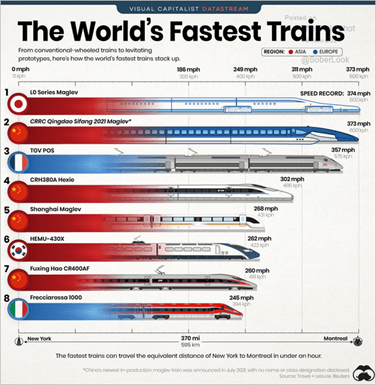 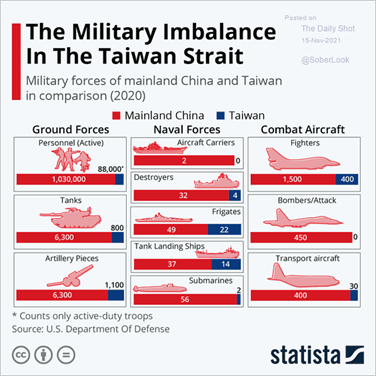 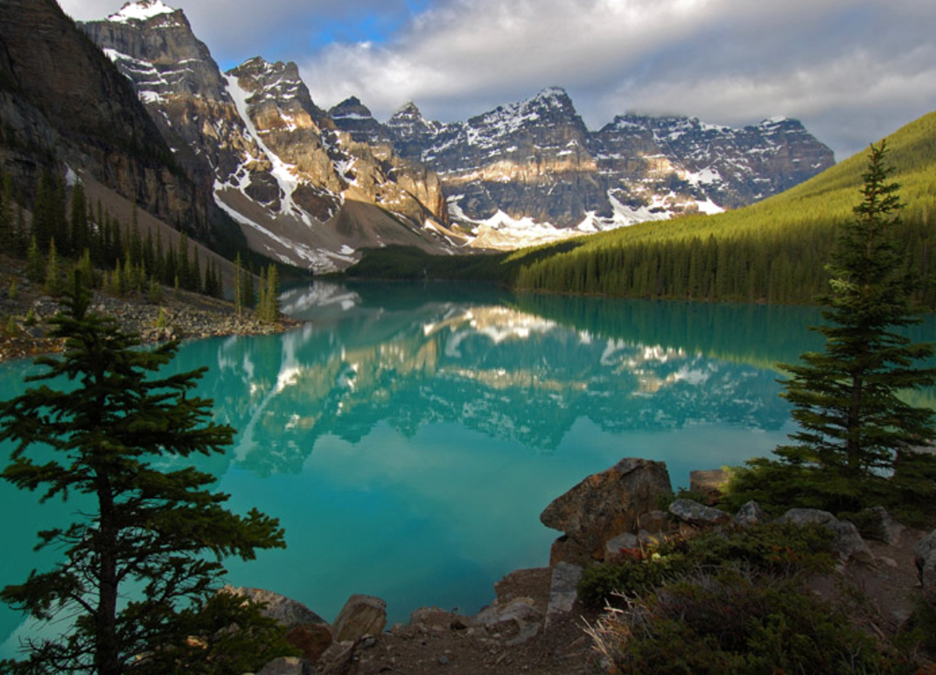 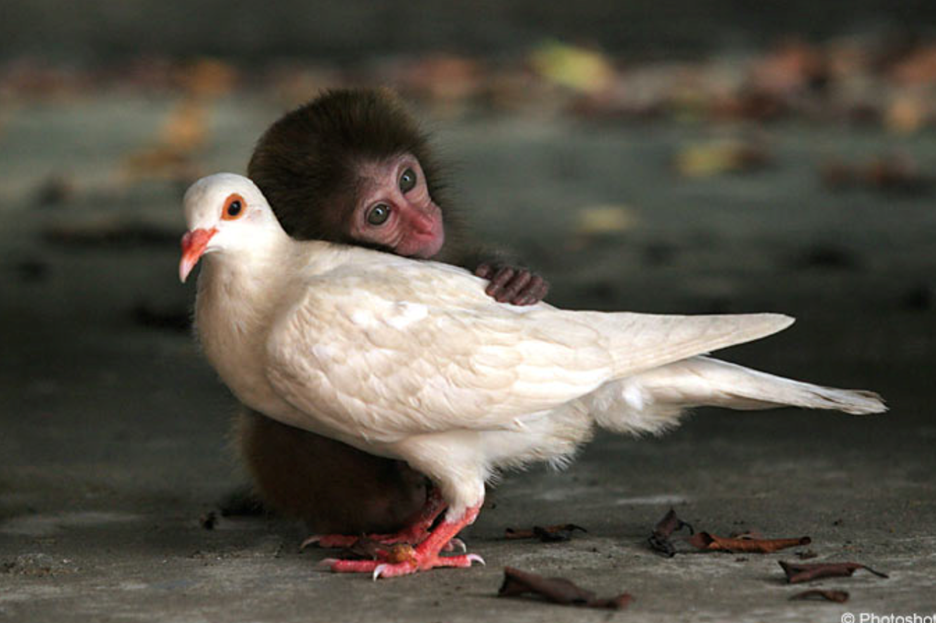 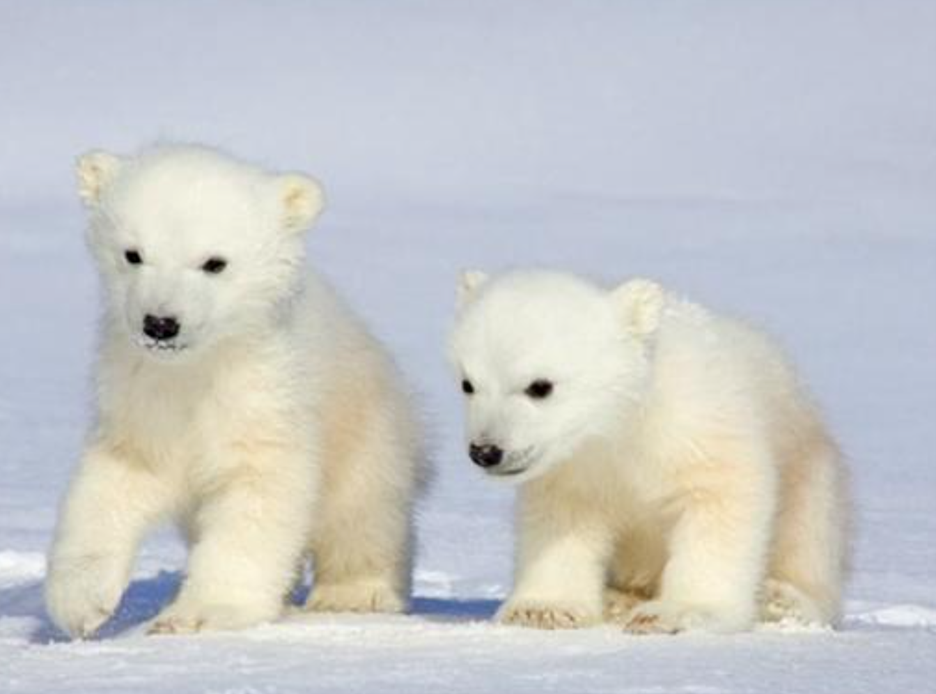