Biggest Decline in S&P Earnings… EVER!

Biggest Decline in S&P Earnings… EVER!

In fact, this marked the largest decline in the quarterly EPS estimate during a quarter since FactSet began tracking this data in Q1 2002. The previous record was -34.3%, which occurred in Q4 2008.” – FactSet 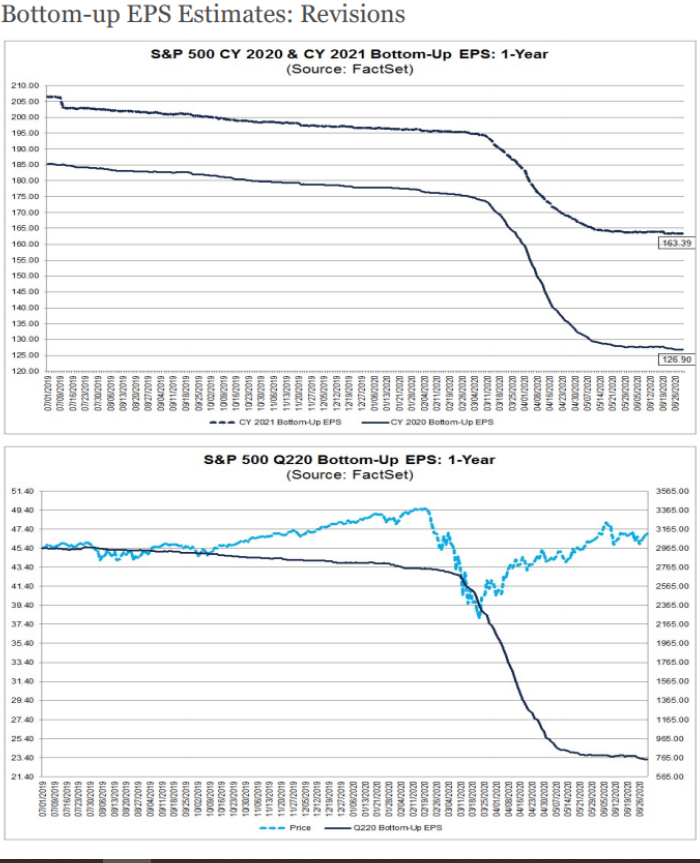 Importantly, earnings estimates did not decline due to just the onset of the “pandemic.” Earnings began to decline in earnest in late 2018 as economic growth had started to weaken. The important point is that investors have been overpaying for earnings by more than 2.5x since the peak in earnings in 2018. Since 2009, investors have bid up stock prices by more than 368%. Yet, cumulative operating earnings and revenue have only grown by 93% and 50%, respectively. Even if the expected “hockey stick recovery” in earnings occurs, earnings will only return to the same level as they were in 2018.

If we assume analysts are correct, and historically they over estimate by 33%, investors have vastly overpaid for earnings. Such has historically guaranteed investors disappointing investment outcomes.

Wall Street profits don’t come from servicing “Mom and Pop” retail clients trying to save their way into retirement. Wall Street is not “invested” along with you, but “uses you” to generate income for their “real” clients.

Such is why “buy and hold” investment strategies are so widely promoted. As long as your dollars are invested, the mutual funds, stocks, ETF’s, etc., the Wall Street firms collect their fees. These strategies are certainly in their best interest – just not necessarily yours.

However, those retail management fees are a “rounding error” compared to the really big money.

Wall Street’s real clients are multi-million and billion-dollar investment banking transactions. These deals include public offerings, mergers, acquisitions, and debt offerings, which generate hundreds of millions to billions of dollars in fees for Wall Street each year.

You know, companies like Uber, Lyft, Snapchat, Tesla, and Shopify.

For Wall Street firms to “win” that very lucrative business, they must cater to their prospective clients. Not surprisingly, it is difficult for a firm to gain investment banking business from a company with a “sell” rating.

Such is why “buy” ratings are so prevalent versus “hold” or “sell,” as it keeps the client happy. I have compiled a chart of 4644 rated stocks ranked by the number of “Buy”, “Hold” or “Sell” recommendations. 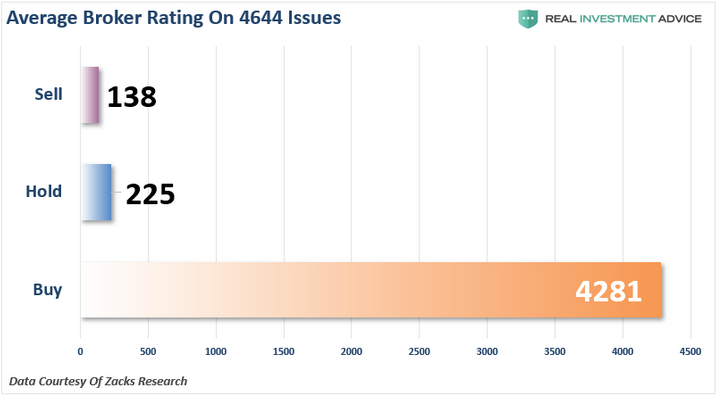 But for Wall Street, a “sell” rating is not good for business.

The conflict doesn’t end just at Wall Street’s pocketbook. Companies depend on their stock prices rising as it is a huge part of executive compensation packages.

Corporations apply pressure on Wall Street firms, and analysts, to ensure positive research reports with the threat they will take their business to a “friendlier” firm. The goal of boosting share prices for compensation is also why roughly 40% of corporate earnings reports are “fudged” to produce better outcomes.

I do not trust Wall Street research.  I have seen way too many compromises behind the scenes to get bigger Corporate fees.

Based upon GAAP (Generally Accepted Accounting Principles) earnings, the S&P 500 is far above its normal value range. The following chart shows us the normal value range of the S&P 500 Index, indicating where the S&P 500 would have to be in order to have an overvalued P/E of 20 (red line), a fairly valued P/E of 15 (blue line), or an undervalued P/E of 10 (green line). Annotations on the right side of the chart show where the range is projected be based upon earnings estimates for the next four quarters, through 2021 Q1. Perhaps, referring to the estimates with the implied appellation of “lies” is overstating a bit, but I think calling them WAGs (Wild Audacious Guesses) certainly fits the situation. In normal circumstances, projecting earnings is always difficult, but the COVID-19 disruption has made the task nearly impossible. 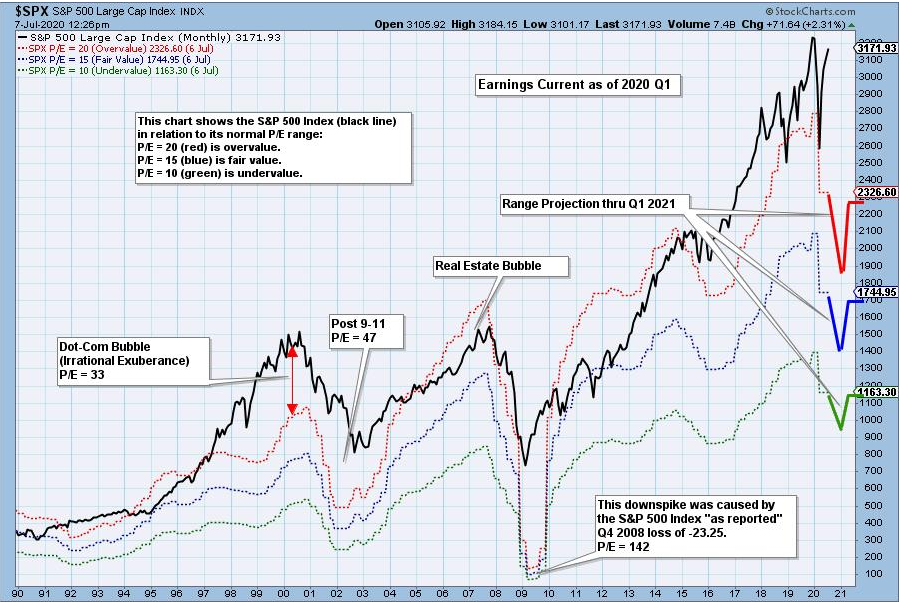 I use GAAP earnings as the basis for this article. The table below shows earnings projections through March 2021.

The following table shows where the colored bands will be based upon earnings estimates.

The forward price/earnings ratio for small-cap stocks is at a 25-year high. Part of the reason is uncertainty surrounding fundamentals, not helped by the fact that nearly a third of stocks in the Russell 2000 are showing operating losses over the past 12 months. That high of a percentage of money-losers has only been seen twice before in 20 years.

CONCLUSION: It is said that the market hates uncertainty, and I can think of no more uncertain time in regard to future earnings. The amount of damage that has been done to the economy is inestimable, and it is anybody’s guess how fast it will recover. Standby for major revisions to earnings estimates.

Bottom Line: These conditions aren’t a formula for rising valuations or a bull market. They suggest higher volatility, more caution, and lower valuations for the next several years. The Federal Reserve can stabilize markets for short periods but isn’t a longer-term solution.

Stock Market Optimism is Based on 3 Things

You can see in the chart below how the Fed’s balance sheet has skyrocketed this year.

The Fed’s balance sheet – covering all the assets that the central bank is responsible for – has ballooned from $595 billion at the end of 1999 to about $7.2 trillion today. That’s 12 times higher… and it has been almost exclusively a one-way road.

Except for a brief period in 2018 and early 2019 (which led to stock market volatility), the Fed’s balance sheet has gone in one direction… up. And that’s from what is supposedly the lender of last resort. So, we really must be out of options. 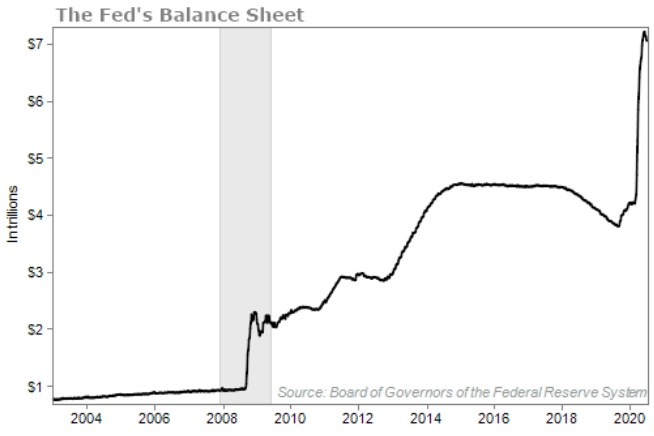 With the Fed buying U.S. Treasury’s, corporate bonds, and exchange-traded funds (“ETFs”), it should provide strong support for the market… at least in the short term.

Meanwhile, we’re seeing signs that folks are leaving their houses and spending again.

You are probably seeing the roads are nearly full again. The stores in my neighborhood and our weekly farmers market were packed… and I’m hearing about more of my family and friends taking vacations – or at least planning to get away sometime this fall.

Retail sales plunged in March and April, but then came roaring back in May.

And finally, any additional progress on a vaccine will certainly make investors more willing to buy stocks. Although biotech company Moderna (MRNA) had to recently delay the start of its Phase III vaccine trial, it’s still on track to begin that phase within the next 30 days.

Vaccines usually take years to develop, receive approval, manufacture, and distribute. But again, we’re in unprecedented times right now… We’ve never had so many scientists and doctors working so hard and so fast on developing a single vaccine. So, there’s hope that a vaccine will be ready by the end of the year or in early 2021. (Note that I emphasized “hope”…)

Corporate debt as a percentage of U.S. gross domestic product is now at its highest level in decades. That alone may keep folks out of the market (or at least keep them skeptical). 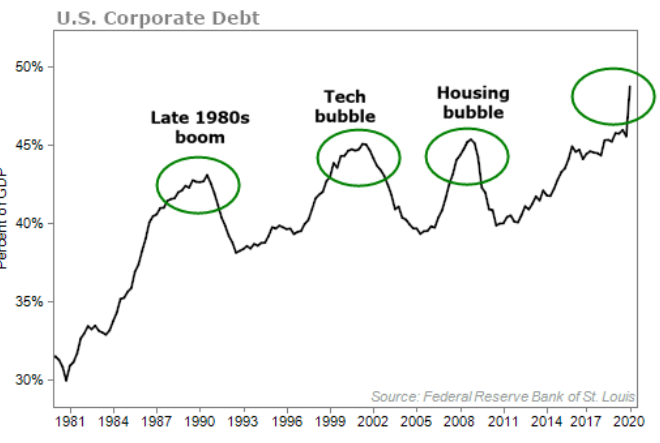 Non-financial business debt hits a 74% ratio to GDP during a debt-fueled recovery. As we’re reminded by today’s Financial Times, the IMF closed out 2019 with a stern warning that 40% of $19 trillion in business debt, led by the United States, could be vulnerable if there was a “material slowdown.”

You’d agree what we’re contending with today is “material.”

The world has never seen anything remotely like this.

An economy with double-digit-percentage unemployment isn’t going to have a V-shaped recovery. It just can’t. Yes, some specific areas and industries might do well. But consumer spending, consumer confidence, and business capital spending will be nowhere near normal. Neither will GDP growth.

And if we manage to recover from all that, we will still face a global recession and a slowdown in trade and travel. Countries that have beaten down the coronavirus are understandably not going to admit travelers from places where it is rampant. This makes international commerce difficult, at best. And you might say that’s ok because we need to be less dependent on other countries like China. I agree. But there are good ways and bad ways to make that transition, and cold-turkey isn’t a good one. 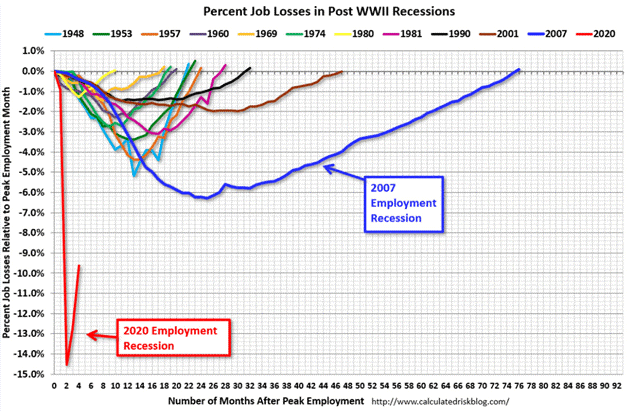 We are in a period of great uncertainty. 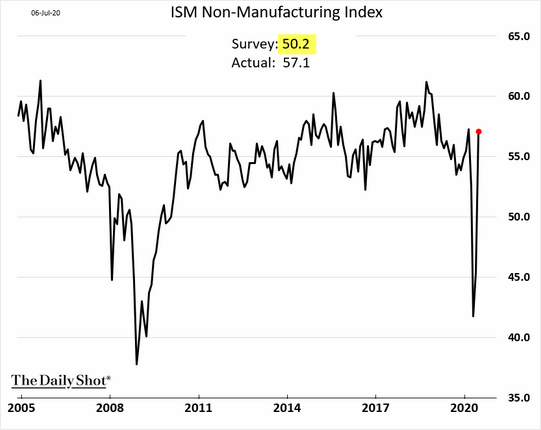 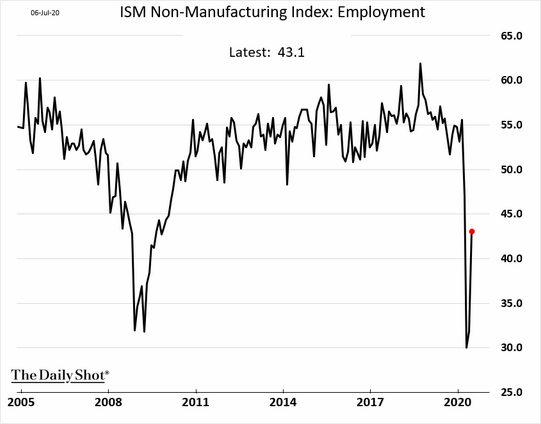 Forecasters have been surprised by the speed of the US economic rebound. Here is the Citi Economic Surprise Index (includes the ISM non-manufacturing report). However, the recovery has been losing momentum over the past couple of weeks.

The updated Markit US Services PMI didn’t show the same level of strength as the ISM index, but it points to business activity stabilizing. 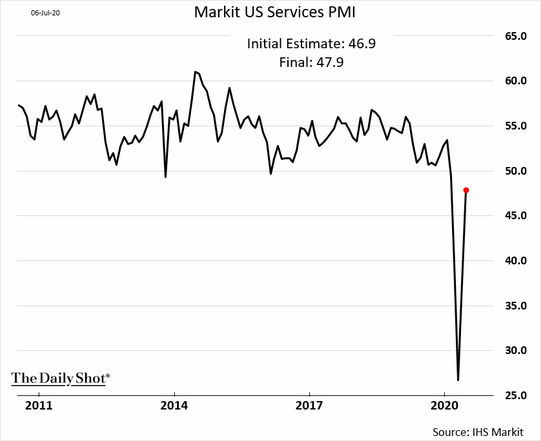 Next, we have some updates on the labor market. 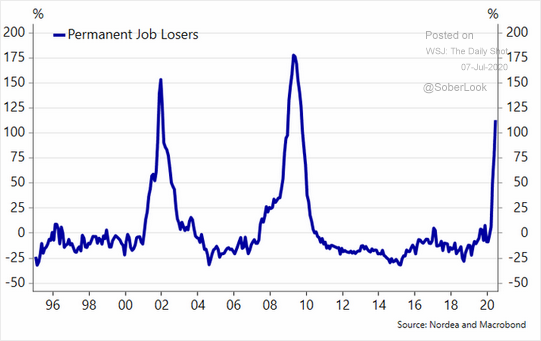 The recovery in small business employment has stalled. 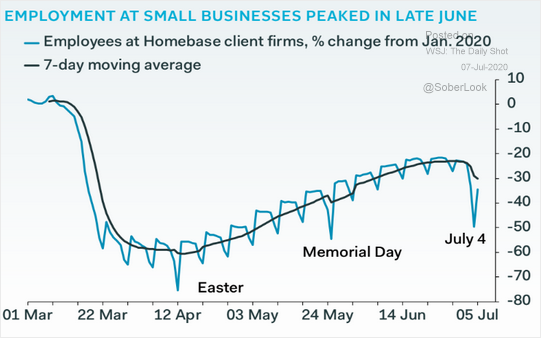 Another 1.4 million Americans filed for unemployment benefits last week. Filings started climbing again as the pandemic worsened in a number of states.

We now have nearly 36 million workers who are either on or have recently applied for unemployment benefits. That’s about 23% of the US civilian workforce. So, how can “Unemployment be just 11%”?

Then there is the, hard-to-measure but real, question of how extra benefits have affected people’s willingness to work. If you can make more money staying home than by working, staying home is perfectly rational. But will you admit that in a government survey? 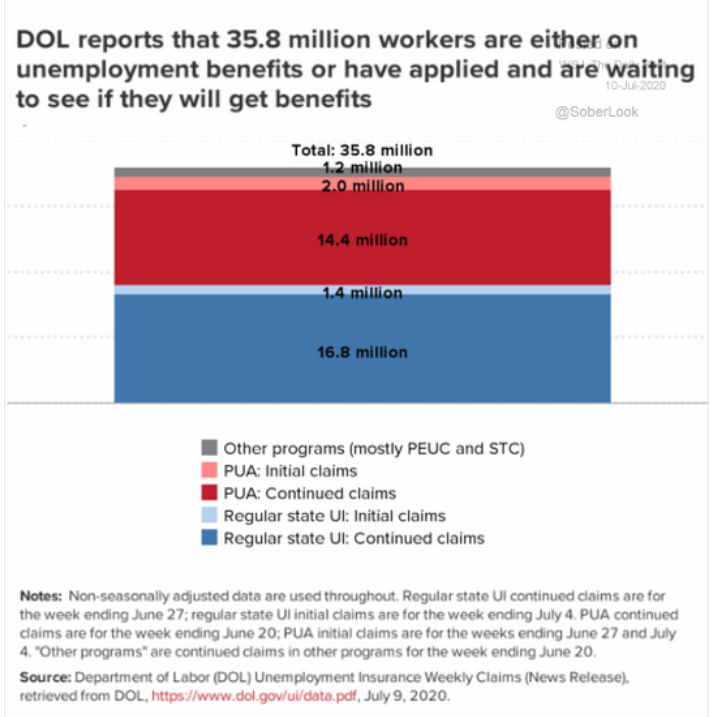 Dr Copper – Copper has recovered most of the year-to-date losses. 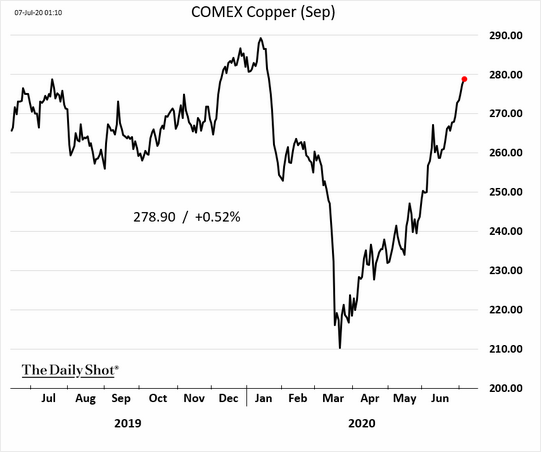 Many small businesses remain concerned about customers being afraid to return. 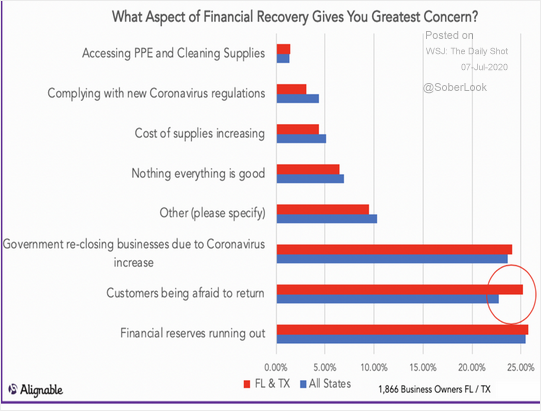 The Fed has maxed its holdings in the 2036-2042 Treasury maturities. 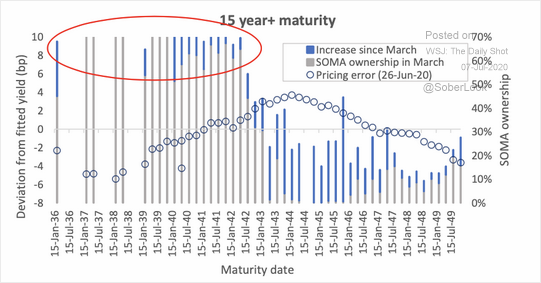 The two charts below compare the Fed’s and the ECB’s balance sheets. 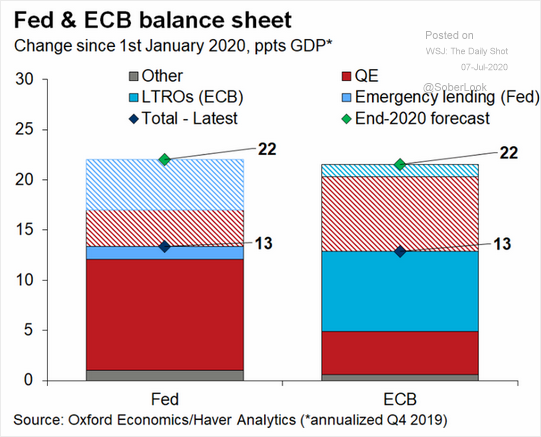 The problem the Fed, and Global Central banks, currently face is an inability to extract themselves from ongoing monetary policy measures. After the “Financial Crisis,” the Fed had hoped they would be able to reduce their accommodation as economic growth and inflation returned. 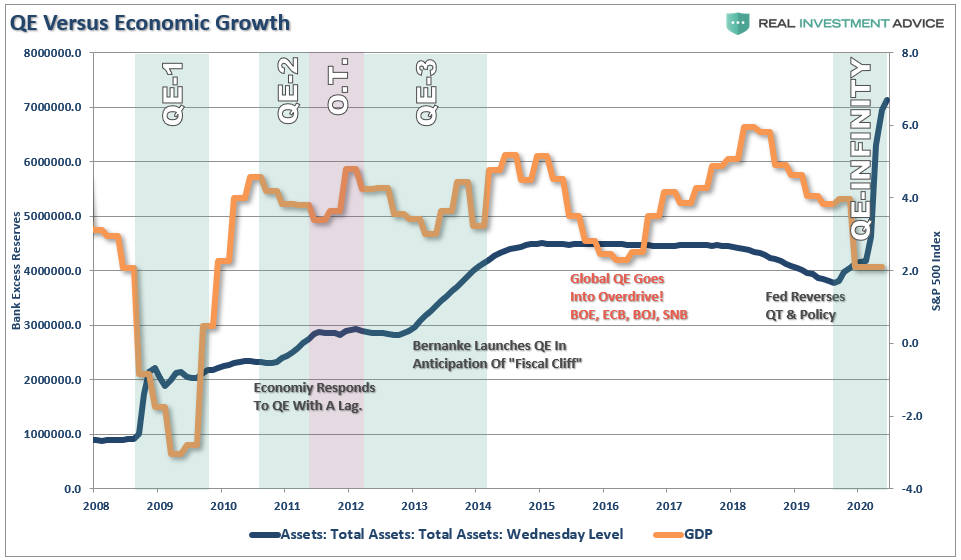 Instead, as each year passed, more monetary policy was required just to sustain economic growth. Whenever the Fed tightened policy, economic growth weakened, and financial markets declined. The table shows it takes increasingly larger amounts of QE to create an equivalent increase in asset prices.

As with everything, there is a “diminishing rate of return” on QE over time. Since QE requires more debt to be issued, the consequence is slower economic growth over time.

The relevance of debt growth versus economic growth is all too evident. Debt issuance initially exploded during the Obama administration. It further accelerated under President Trump and has taken ever-increasing amounts of debt to generate $1 of economic growth. 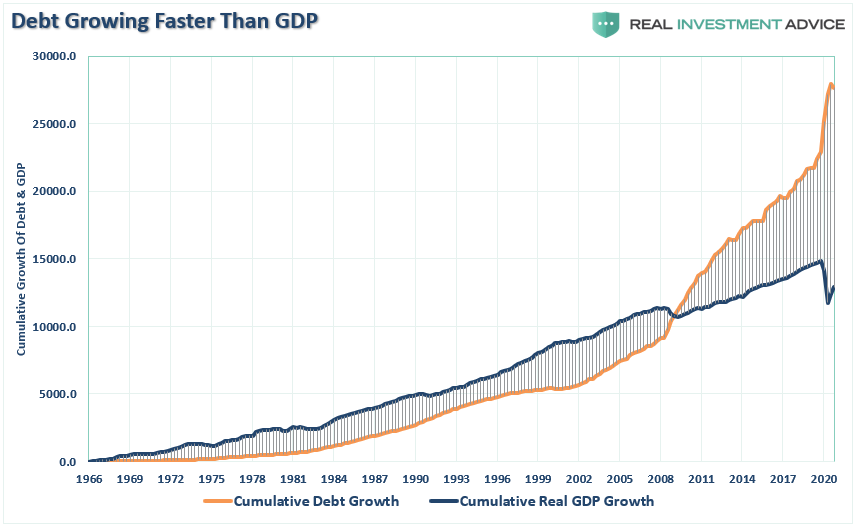 In other words, without debt, there has been no organic economic growth. 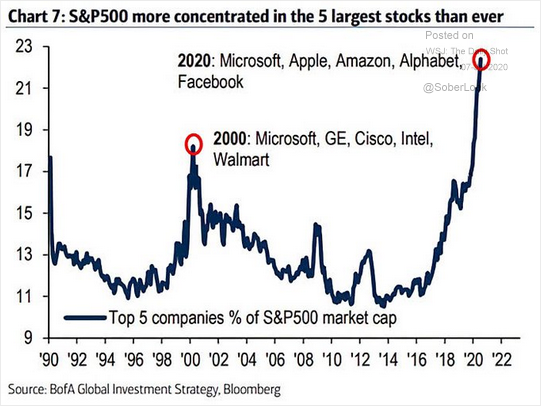 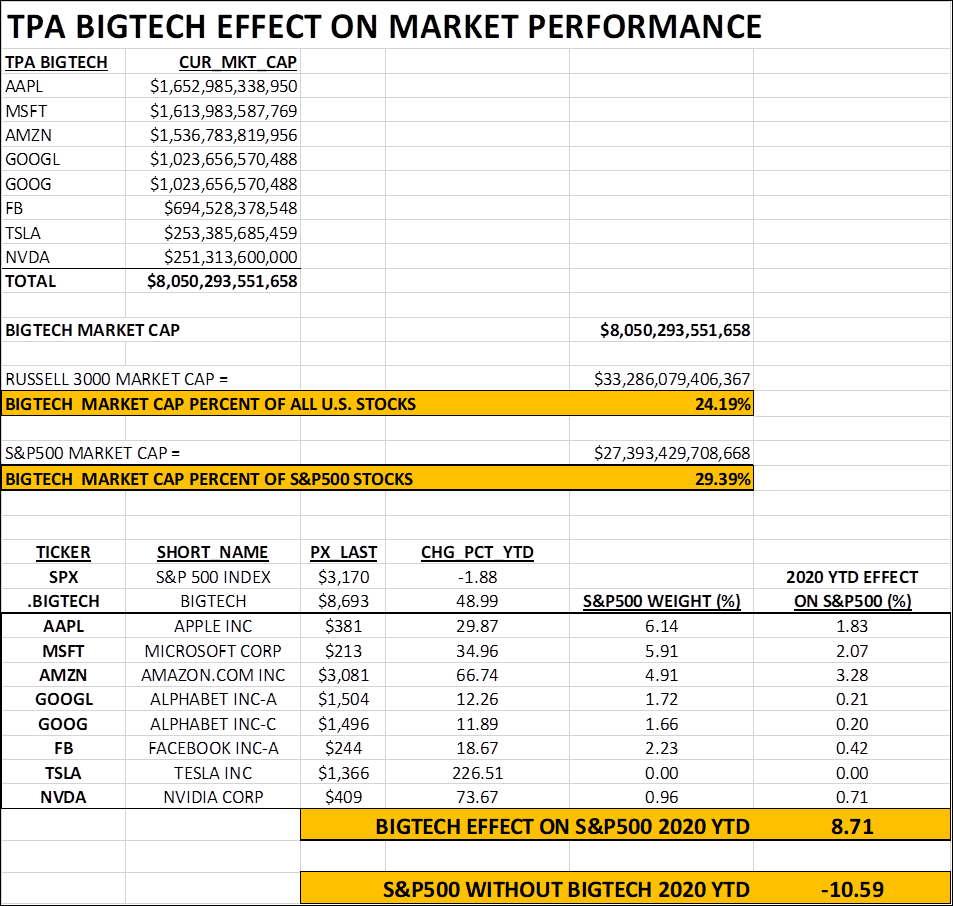 The biggest companies by market cap are the most expensive and have the highest returns this year. Without the BIGTECH stocks, the benchmark would be down 10.5% in 2020. 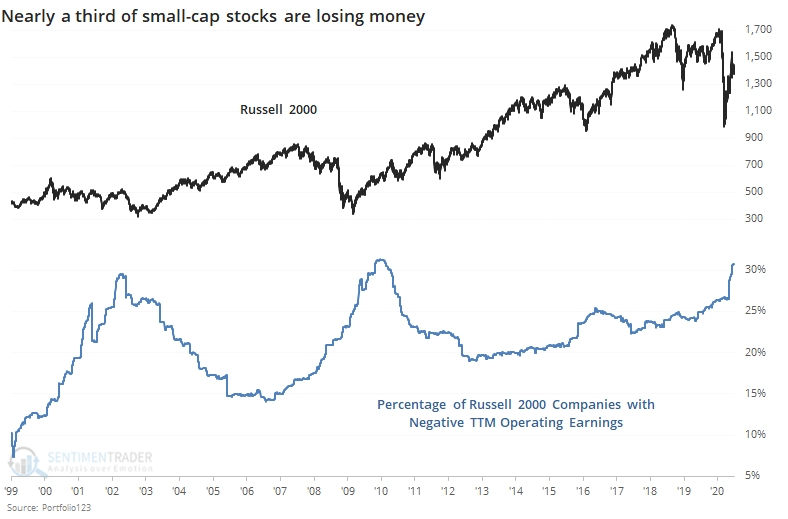